Canadians seeking to get their hands on legal recreational marijuana faced long lines and supply shortages in some parts of the country on Thursday.

The United States’ neighbor to the north on Wednesday became the first industrialized nation to legalize the drug after a nearly century-long ban and a two-year push by the government of Prime Minister Justin Trudeau.

Most pot enthusiasts were exuberant about the end of prohibition, but a few expressed disappointment over not being able to buy the now-legal marijuana on the first day. 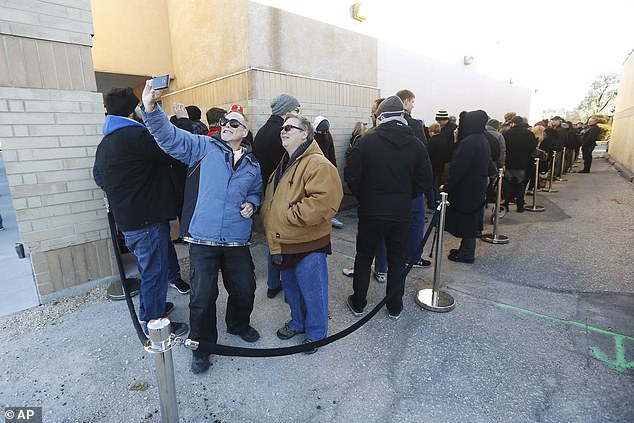 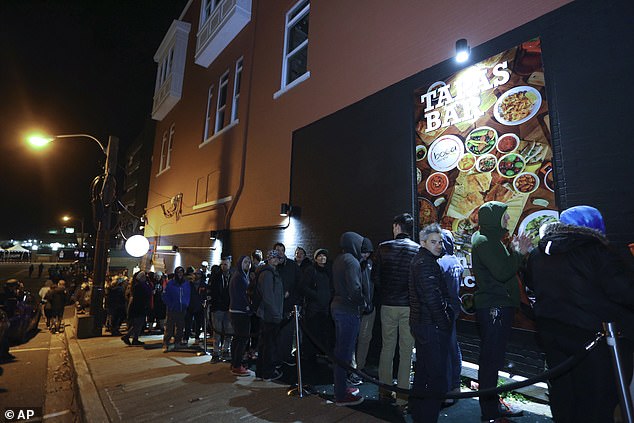 Others balked at the relatively high prices – ranging from $5.25 in Canadian dollars in Quebec to $18.99 in Saskatchewan per gram – compared to the black market that saw average prices plunge in the last year to $6.79 per gram.

After waiting seven hours in line at a store in downtown Montreal on Wednesday, Alexandre, 30, said he was turned away at closing at 9pm. Police stepped in to disperse the crowd, without incident.

‘It was hell, it was cold,’ Alexandre said. ‘But we had fun anyway, talking with people in the crowd and sharing joints.’

He was back early Thursday morning to try again.

‘Yesterday was the day that everyone was waiting for but I think that little by little the queue will decrease,’ he said.

Genevieve Despres, 41, was one of the lucky ones to make it inside the store on Wednesday. She described the scene in line as ‘super friendly, we sang, we laughed, I made friends.’ 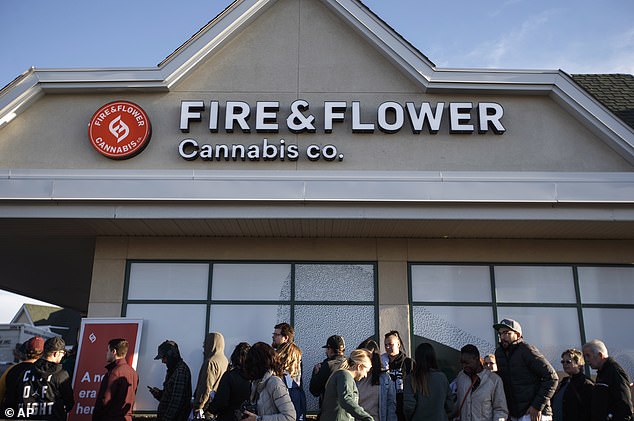 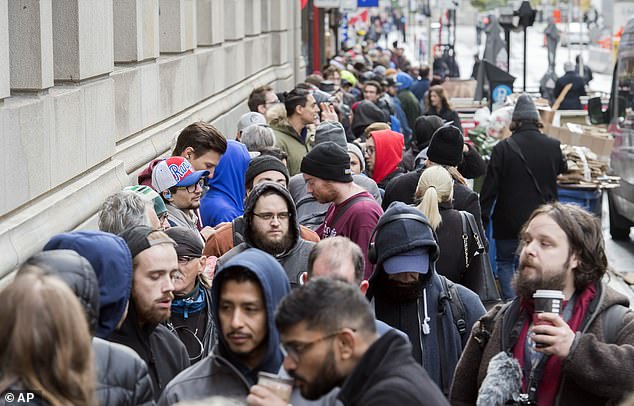 ‘I do not usually smoke but since it was a historic day for Canada I thought I’d try,’ she told AFP.

Despres smoked bought pot with a low level of THC, the psychoactive agent in cannabis.

‘My God it’s the bomb!’ she said and returned with friends Thursday to buy more.

Supply shortages were reported in the provinces of Newfoundland and Saskatchewan, as well as in the Arctic territory of Nunavut.

Several online retailers including the Ontario government’s pot portal, meanwhile, warned customers to expect shipping delays of up to five days as they worked late into the night filling orders.

Canada Post workers are also poised to strike starting on Monday after more than a year of contract talks stalled, which could further delay deliveries of online orders.

‘We expected, you know, certain strains might run out and there would be a bit of a run on supply,’ Bill Blair, a former Toronto police chief who is the government’s point person for legalization, told public broadcaster CBC.

‘But, you know, they’ve got a pretty good infrastructure in place and I’m confident it will work,’ he said.

Countries around the globe, many of whom are just approving medical marijuana, are watching Canada’s recreational legalization, which combines federal rules with varying provincial regulations.

The move is a political win for Trudeau, who vowed to legalize cannabis in his 2015 election campaign to take profits away from organized crime and to regulate the production, distribution and consumption of a product that millions of Canadians have been consuming illegally.

Provinces and businesses have been struggling to prepare, and legalization was pushed back from original expectations of a July start to enable setting up distribution and sales networks.

In the run-up to legalization, cannabis companies have been on a tear, as companies struck corporate deals while others went public creating an investor frenzy.

The Canadian federal government as well as many provinces have been cautious, starting with limited stores and products, including no edibles for a year, and tight control over supply.

Newfoundland and Labrador, Canada’s easternmost province, was the first to kick off legal sales at the stroke of midnight Wednesday.

Ontario, home to Canada’s most populous city, Toronto, will have no stores until April 2019, with online sales the only avenue to get legal product due to a change to the province’s retail model by a new provincial government.

British Columbia, which plans both province-run and private outlets, will have only one government store open in Kamloops, 220 miles from its biggest city Vancouver.

Montreal’s downtown marijuana retail outlet has a sterile look, like a modern clinic, with a security desk to check identification. The products are displayed in plastic or cardboard packages behind counters. Buyers can’t touch or smell before they buy. A small team of employees answers questions but don’t make recommendations.

In Alberta, lines snaked around some of the 17 legal shops that opened Wednesday, including an Edmonton branch of Fire and Flower, a company that hopes to open as many as 200 marijuana outlets across the country in the next two years.

Fried food DOES increase your risk of coronary artery disease: Scientists discover fries block the blood vessels that supply the heart after years of ‘conflicting’ results