Drinking piping hot tea or coffee could more than double the risk of developing cancer, research has warned.

People who regularly consume their tea at 60°C (140°F) or higher see their risk of gullet cancer rise by 90 per cent.

But letting a cup of freshly boiled tea to cool down for several minutes before drinking it could help.

The study, led by Tehran University of Medical Sciences in Iran, adds to an array of research linking hot drinks to the disease.

But this is the first time the link has been found in a large-scale study which has followed people for a long time.

Scalding water irritates the lining of the mouth and throat which can fuel tumours, scientists believe.

Oesophageal cancer is the eighth most common cause of cancer worldwide and one of the main causes of cancer death. 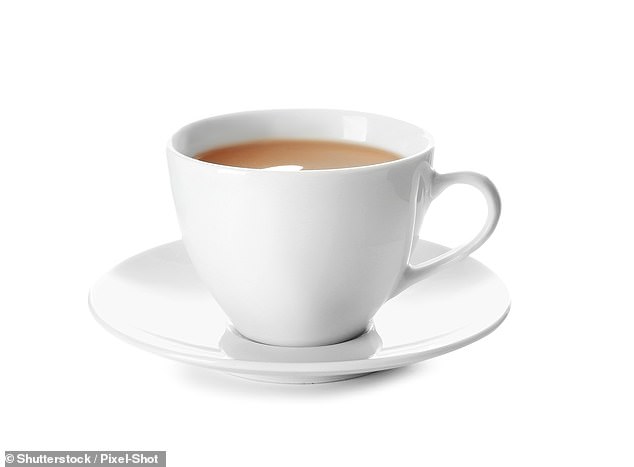 Experts found that drinking 700ml per day of tea at 60°C or higher was ‘consistently associated’ with a 90 per cent increased risk of the disease, compared with people who consumed drinks at lower temperatures

The researchers said their findings based on tea will apply to other hot beverages, including coffee or hot chocolate.

Published in the International Journal of Cancer, the study looked at the drinking habits of 50,045 people aged 40 to 75 who lived in north-eastern Iran.

During a follow-up period from 2004 to 2017, 317 new cases of oesophageal cancer – also known as cancer of the food pipe – were identified.

The risk of oesophageal cancer rose to 2.4 times among those who regularly drank it at 75°C (167°F).

Several mechanisms could explain how drinking hot beverages could lead to cancer of the oesophagus, said the researchers.

The heat could injure the gullet leading to inflammation, which could damage DNA and fuel production of carcinogenic chemicals.

It could also impair its ability to act as a barrier to harmful toxins from alcohol and smoking.

Oesophageal cancer mainly affects people in their 60s and 70s and is more common in men than women.

Symptoms can include difficulties in swallowing, persistent indigestion or heartburn, bringing up food soon after eating, a loss of appetite and weight loss.

Dr Islami said: ‘To our knowledge, this is the only large-scale prospective study in the world in which actual tea drinking temperature has been measured by trained staff.

‘It may thus be a reasonable public-health measure to extrapolate these results to all types of beverages, and to advise the public to wait for beverages to cool to under 60°C before consumption.’

That is below the World Health Organisation’s recommendation of less than 65°C (149°F).

In 2016, the International Agency for Research on Cancer (IARC) – a cancer agency of the World Health Organisation – classified drinking very hot beverages above 65°C as a probable carcinogen.

But cancer charity Cancer Research UK said most Brits would not drink tea or coffee at such temperatures.

Georgina Hill, health information officer at Cancer Research UK, said: ‘This study adds to the evidence that having drinks hotter than 60°C may increase the risk of oesophageal cancer, but most people in the UK don’t drink their tea at such high temperatures.

‘As long you’re letting your tea cool down a bit before you drink it, or adding cold milk, you’re unlikely to be raising your cancer risk – and not smoking, keeping a healthy weight and cutting down on alcohol will do much more to stack the odds in your favour.’

Previous research has suggested waiting at least four minutes before drinking a cup of freshly boiled tea, or more generally allowing foods and beverages to cool from ‘scalding’ to ‘tolerable’ before swallowing.

Women who drink tea or coffee during pregnancy are more likely to have small babies, research suggested last November.

Even women who drink less than the ‘safe’ cutoff of 200mg caffeine – about two mugs of instant coffee or three cups of tea – are more at risk of having low-birth weight or premature newborns.

The study, led by doctor Ling-Wei Chen, looked at 941 mother-child pairs born in Ireland. Tea was the mothers’ main source of caffeine (48 per cent), followed by coffee (38 percent).

The results suggested that for every additional 100mg of caffeine – around half a cup of coffee – consumed daily during the first trimester, birth weight was reduced by 0.5lbs (72g).

A new high? Cannabis compound that may be 30 TIMES more potent than THC is discovered by scientists