Maggots are already used by the NHS to heal wounds, while the Ancient Egyptians believed in pouring honey into cuts.

And now doctors in Indonesia have revealed another unusual way of treating gashes to the skin – pouring coffee powder onto them.

Ground beans were used to treat a 63-year-old man with three diabetic foot ulcers after he refused to have an amputation. 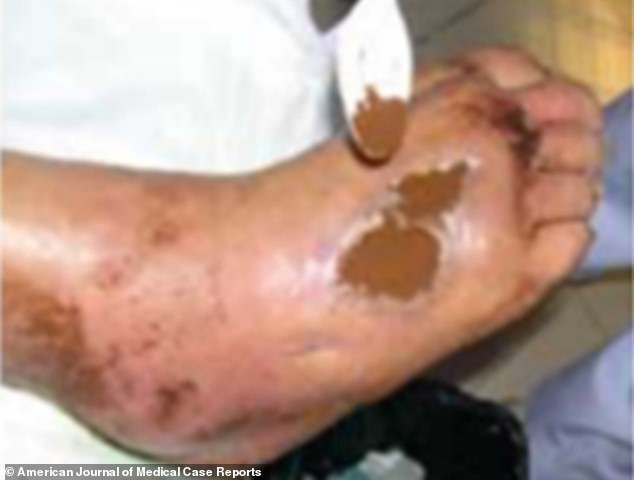 Doctors at the Universitas Padjadjaran in West Java, Indonesia, poured 100g (3.5oz) of coffee onto the suffering man’s swollen foot.

The team, led by Hendro Sudjono Yuwono, called it a ‘cost-effective’ way of treating the infected abscess on the top of the man’s right foot.

After pouring the coffee powder into the wound and wrapping it in a dressing, the medics replaced it once per week.

A thin layer of powder was left on the broken flesh at all times, in order to stop the new growing cells from being disturbed.

‘The coffee solution is reliable because coffee has the ability as an antioxidant, anti-inflammatory, and strong antibacterial,’ Mr Yuwono said.

He said various chemicals in the coffee, among them caffeine, could keep the wound cells healthy and help them to heal faster.

‘The powdered coffee is a perfect wound dressing for any wound,’ Mr Yuwono claimed.

An added benefit of using coffee, Mr Yuwono said, was that it could quickly cover up the smell of an infected wound with a much more pleasant aroma.

‘Ground coffee directly put into the wound [was] the most appropriate for countering the smell,’ he wrote in the report.

‘The coffee powder has a unique aromatic scent that eliminates the stinking wound in a second.’

To sum up, the medics suggested it was preferable to use coffee over modern dressings which needed ‘repeated soaking and rubbing’ and agitated the wound to lead to a longer, more painful and more expensive healing process.

Diabetic foot ulcers, which develop when nerve damage and poor blood supply stop cuts from healing, are common but can lead to severe complications.

If they become too large or deep people may need to have their foot amputated to prevent a deadly infection spreading through their body.

Mr Yuwono’s paper was published in the American Journal of Medical Case Reports.

HOW COULD COFFEE POWDER HEAL A WOUND?
Doctors at the surgery department at the Universitas Padjadjaran in West Java, Indonesia, claim coffee powder is the ‘perfect wound dressing’.

They said there have been more than 200 recorded cases of coffee powder successfully healing wounds without complications since 2004.

He also said a layer of coffee which turns into a film over the exposed flesh can protect it from further damage from friction or washing, helping the cells to heal faster without being disturbed.

And the powdered beans may also be able to protect against common hospital infections including MRSA and E.coli, he added, by producing hydrogen peroxide when it reacts with fluid in the wound – this could impair bacteria’s ability to reproduce.