Obesity is now a bigger cause of many types of cancer than smoking, scientists have revealed.

And people who are dangerously overweight now outweigh smokers by two to one, experts say, with almost a third of British adults classed as obese.

Smoking remains the leading preventable cause of cancer but the number of smokers is falling while obesity rates rise.

The figures were released by Cancer Research UK in the midst of a ‘fat shaming’ row centred around their latest campaign raising awareness of the dangers of obesity. 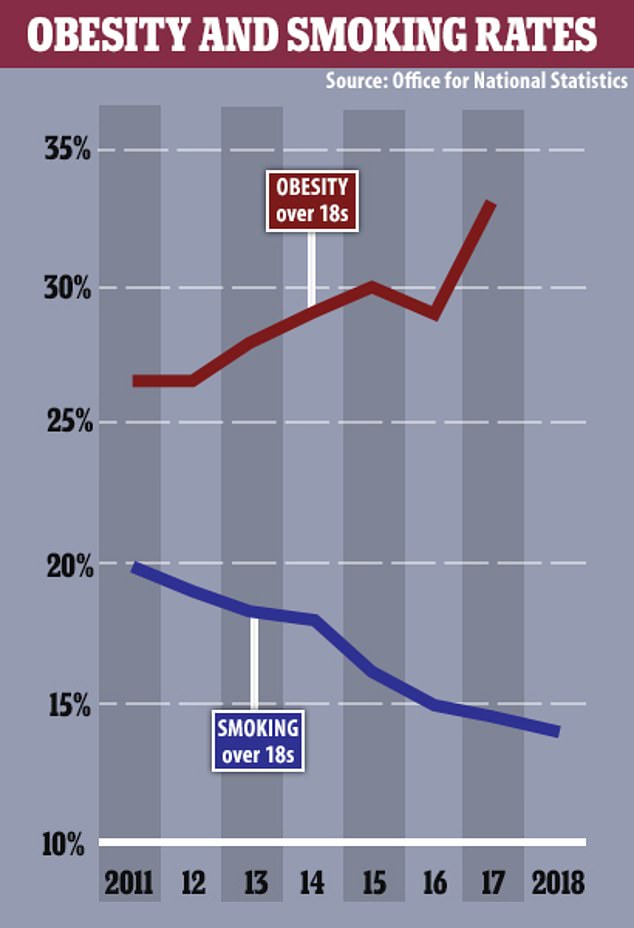 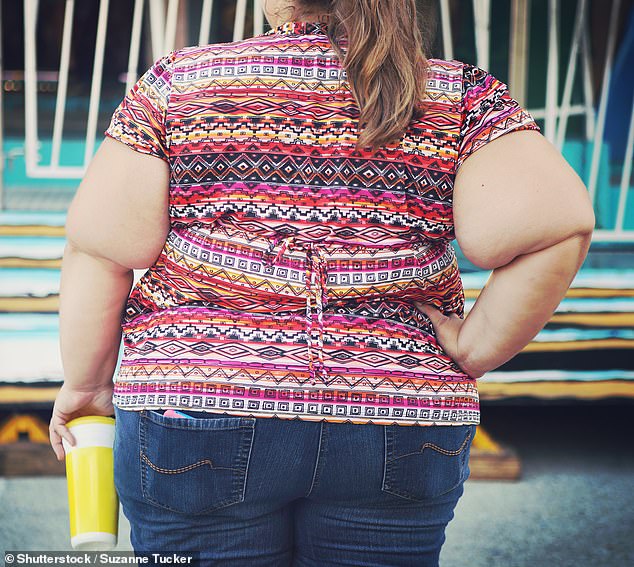 Obesity is now a bigger cause of many types of cancer than smoking, figures released by Cancer Research UK reveals. Stock photo

The charity has revealed around 1,900 more cases of bowel cancer are caused by obesity than smoking in the UK each year.

And although smoking is more damaging, sheer numbers mean the burden of obesity-related disease is swelling.

There are around 13.4million obese people who don’t smoke, compared to 6.3million smokers who are a healthy weight.

It’s a problem which isn’t showing signs of slowing down, either, with one in 10 children now obese by the age of five and a fifth of them overweight by age 11.

Michelle Mitchell, CRUK’s chief executive, said: ‘As smoking rates fall and obesity rates rise, we can clearly see the impact on a national health crisis when the Government puts policies in place – and when it puts its head in the sand.

‘Our children could be a smoke-free generation, but we’ve hit a devastating record high for childhood obesity, and now we need urgent Government intervention to end the epidemic. They still have a chance to save lives.

‘Scientists have so far identified that obesity causes 13 types of cancer but the mechanisms aren’t fully understood.

‘So further research is needed to find out more about the ways extra body fat can lead to cancer.’

The charity is calling on the Government to act on its ambition to halve childhood obesity rates by 2030 by banning junk food adverts on TV and online before 9pm.

Other measures should include restricting promotional offers on unhealthy food and drinks, it said.

Professor Linda Bauld, CRUK’s prevention expert, said: ‘There isn’t a silver bullet to reduce obesity, but the huge fall in smoking over the years – partly thanks to advertising and environmental bans – shows that Government-led change works.

‘It was needed to tackle sky-high smoking rates, and now the same is true for obesity.’

Earlier this week, CRUK faced a backlash on social media for its advertising campaign warning people that obesity can give them cancer.

One advert reads: ‘Like smoking, obesity puts millions of adults at greater risk of cancer.’ 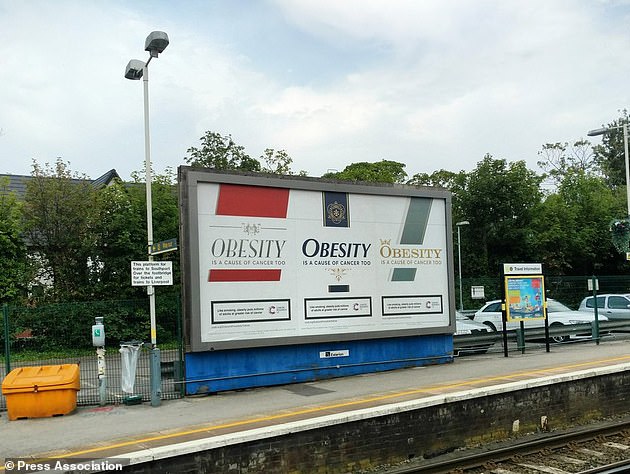 Ken Lynch, a 46-year-old microbrewery owner, spotted a billboard at Freshfield train station in Formby and said it was ‘insensitive’.

He said: ‘I don’t like it. I understand that Cancer Research UK want to say there is an increased risk of cancer if you are obese, but to link it visually with smoking is crass.

‘It is insensitive to people who are overweight and are trying hard to do something about it. Obesity is not the same as smoking and it is a mistake to link the two.’

He wrote on Twitter: ‘The message is clear that they are calling for the food and drink industry to be regulated in the same way as the tobacco industry #nannystate #slipperyslope’.

Simone Harding, a counsellor and nutritionist based in Devon, said: ‘Weight stigma is rife across society – the research detailing weight stigma in healthcare, media etc shows us that blaming individuals for a situation that is complex leads to worse outcomes, not better. It creates a bigger problem.’

It’s not the first time the charity has drawn a parallel between smoking and obesity, leading to accusations of shaming people who are overweight.

Leading academics and obesity organisations slammed CRUK in February 2018 for a similar campaign that encouraged people to guess the remaining letters in the phrase ‘OB_S__Y is a cause of cancer’.

She wrote at the time: ‘Society viewing fatness as a negative thing is a thing that kills more than the cancer that you MIGHT get due to MAYBE something to do with you POSSIBLY weighing MORE than a CERTAIN weight POSSIBLY MAYBE.’

HOW CAN OBESITY CAUSE CANCER?

Obese people will not definitely develop cancer but they are at a higher risk than people who are a healthy weight.

This is because fat cells are active in the body, releasing hormones and electrical signals which encourage cells to divide and grow.

Cancer is caused by an error in cell division which results in them multiplying uncontrollably and building up into tumours.

The more active cells a person has in their body, the higher the chance of one of them going rogue and triggering this chain reaction.

Obesity is also often associated with an unhealthy lifestyle – eating junk food and not getting enough fruit, vegetables or exercise – factors which are separate but linked and also known to increase the risk of cancer.