A cure for heart failure has moved ‘one giant step closer’ as scientists claim to have found a way to repair damage once deemed irreversible.

Cambridge University researchers made the breakthrough using stem cells, which the body can programme to do anything it needs them to.

Rats with damaged hearts were given a transplant of two types of stem cells taken from different parts of a human heart and grown in a laboratory. 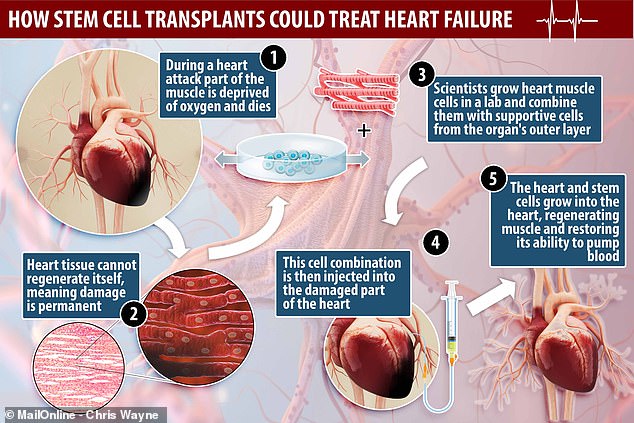 Figures suggest around 900,000 people in the UK have heart failure, along with 5.7million Americans.

It occurs when the organ has lost some of its ability to pump blood round the body, usually because it has become too weak or stiff.

Heart attacks can trigger failure by starving part of the organ of oxygen, causing sections of the tissue to die and become useless.

And heart tissue cannot regenerate itself so any damage caused by this starvation is permanent – for people whose hearts fail completely, a transplant is the only option.

‘There are hundreds of thousands of people in the UK living with heart failure,’ said Dr Sanjay Sinha, who led the study.

‘Many are in a race against time for a life-saving heart transplant.

‘But with only around 200 heart transplants performed each year in the UK, it’s absolutely essential that we start finding alternative treatments.’

Past attempts to implant heart muscle cells on their own have failed because the cells tended to die within a few days, the researchers said.

But the addition of the supporting cells helped the heart cells to grow and mature and made the new tissue they formed better at contracting and relaxing.

The Cambridge team hope the combination they have created may one day be able to regrow human hearts inside human patients.

Both types of the cells used – cardiac and epicardial, which are found in the outer layer of the organ – were grown in a lab from human stem cell samples.

‘Although we still have some way to go, we believe we’re one giant step closer, and that’s incredibly exciting.’

The researchers said they would have to do more work to find out why the epicardial cells were so good at helping the heart muscle to develop.

Stem cells are being used increasingly often in medical science because they have the extremely valuable quality of being able to regenerate damaged or dead tissues.

The cells have the ability to form into bone, muscle, nerve, skin, organs and other tissues in the body – even those which cannot rebuild themselves.

Potential patients who could one day benefit from stem cell therapy include people with spinal cord injuries, Alzheimer’s or Parkinson’s disease, stroke survivors, cancer patients and those with arthritis. 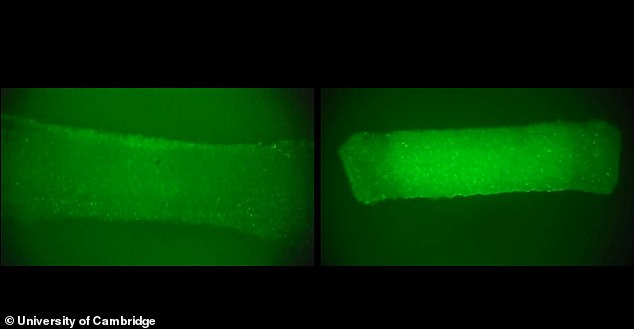 The Cambridge researchers released a video showing how the combined cells are better at growing muscle tissue which can contract and relax properly (right, the contracted flesh), compared to just heart cells on their own (left)

‘We hope that this latest research represents the turning of the tide in the use of these remarkable cells.

‘Despite advances in medical treatments, survival rates for heart failure remain poor and life expectancy is worse than for many cancers.

‘Breakthroughs are desperately needed to ease the devastation caused by this dreadful condition.’

The British Heart Foundation funded the research, alongside the UK Medical Research Council and the National Institute for Health Research.

The study was published in the journal Nature Biotechnology.

WHAT IS HEART FAILURE?

Heart failure means that the heart is unable to pump blood around the body properly. It usually occurs because the heart has become too weak or stiff.

Heart failure doesn’t mean your heart has stopped working – it just needs some support to help it work better. It can occur at any age, but is most common in older people.

Heart failure is a long-term condition that tends to get gradually worse over time. It can’t usually be cured, but the symptoms can often be controlled for many years.

The main symptoms of heart failure are:

Some people also experience other symptoms, such as a persistent cough, a fast heart rate, and dizziness.

See your GP if you experience persistent or gradually worsening symptoms of heart failure.