People who regularly eat dark chocolate are less likely to be depressed, researchers have claimed today.

Scientists quizzed more than 13,000 people about their chocolate consumption and symptoms of depression.

They found volunteers who reported eating any dark chocolate were significantly less likely to report any clinical signs of depression.

However, no such link existed among volunteers who reported eating milk or white chocolate, according to the experts. 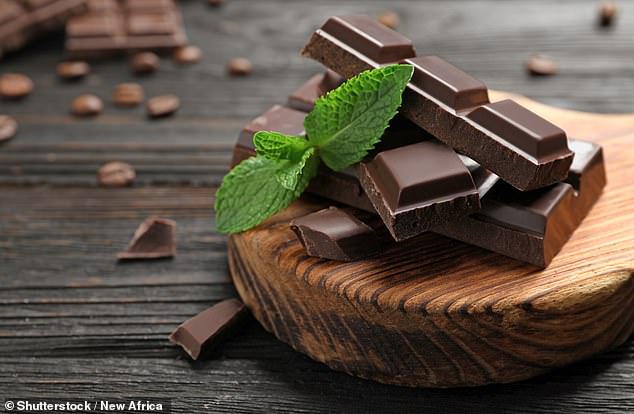 Scientists quizzed more than 13,000 people about their chocolate consumption and symptoms of depression. They found volunteers who reported eating any dark chocolate were significantly less likely to report any clinical signs of depression

However, they said chocolate contains a number of psychoactive ingredients – including two forms of anandamine, which produce a feeling of euphoria similar to that of cannabis.

Dark chocolate also has more antioxidants, which reduce inflammation in the body – a reaction that some experts believe is linked to depression.

However, the team admitted it could also be the case that people who are depressed eat less chocolate because their low mood makes them lose interest in eating sweet treats.

The study, published in the journal Depression and Anxiety, also involved teams of scientists based at institutions in Canada.

Researchers led by Dr Sarah Jackson at UCL took into account other factors that can raise the risk of depression including physical activity and smoking.

Participants were asked to recall what they had eaten over two 24-hour periods between three and 10 days apart.

They were then assessed for symptoms of depression using a diagnostic tool already used by health care professionals.

Dr Jackson and colleagues found no link between eating chocolate that wasn’t of the dark variety and depressive symptoms.

However, volunteers who consumed any amount of dark chocolate over the two days had a 70 per cent lower chance of depressive symptoms.

The 25 per cent of participants who ate the most chocolate of any kind – 104 to 454g – were also 58 per cent less likely to report depressive symptoms than those who didn’t eat chocolate at all.

Dr Jackson said the results provide ‘some evidence’ that eating chocolate, particularly dark, can reduce the risk of depressive symptoms.

She added: ‘However, further research is required to clarify the direction of causation. It could be the case depression causes people to lose their interest in eating chocolate.

‘Or there could be other factors that make people both less likely to eat dark chocolate and to be depressed.’

A tenth of the participants reported eating any chocolate during the course of the study. Of those, 12 per cent (148) consumed dark chocolate.

Writing in the journal, the team said: ‘There are a number of potential mechanisms through which chocolate consumption could prevent the onset of, or cause a reduction in, depressive symptoms.

‘Chocolate contains a number of psychoactive ingredients, including two analogs of anandamine (which produce effects similar to the cannabinoid responsible for euphoria from cannabis) and several endogenous biogenic amines.

‘Notably, the latter include phenylethylamine, a neuromodulator believed to be important for mood regulation and implicated in the pathogenesis of depression.’

Depression affects more than 300 million people worldwide, according to the World Health Organisation, and is the leading global cause of disability.

‘We know depression has marked effects on overall appetite and on the type of foods people crave.

‘And it is just as plausible that the direction of causation is the reverse to the authors’ interpretation.

While it is normal to feel down from time to time, people with depression may feel persistently unhappy for weeks or months on end.

Depression can affect anyone at any age and is fairly common – approximately one in ten people are likely to experience it at some point in their life.

Depression is a genuine health condition which people cannot just ignore or ‘snap out of it’.

Symptoms and effects vary, but can include constantly feeling upset or hopeless, or losing interest in things you used to enjoy.

It can also cause physical symptoms such as problems sleeping, tiredness, having a low appetite or sex drive, and even feeling physical pain.

In extreme cases it can lead to suicidal thoughts.

Traumatic events can trigger it, and people with a family history may be more at risk.

It is important to see a doctor if you think you or someone you know has depression, as it can be managed with lifestyle changes, therapy or medication.

A Discovery That Could Possibly Lead to a Cure for Diabetes