Avoiding alcohol, cutting out cigarettes and exercising more may protect you from dementia, scientists say.

Researchers have uncovered yet more evidence that having a healthy lifestyle can ward off the memory-robbing disorder.

Their study found having unhealthy habits, such as smoking, raises the risk of dementia by around a third.

But the results gave a ‘less optimistic outlook’ for those at high genetic risk of the disorder, with a healthy lifestyle doing little to protect against it. 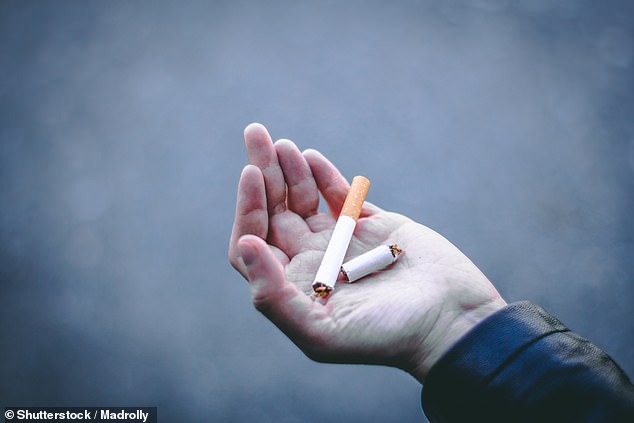 The study by Dutch academics, published in Nature Medicine, followed hundreds of people for an average of 14 years.

During the course of the Erasmus MC – University Medical Center Rotterdam research, 915 volunteers were struck down with dementia.

The researchers worked out each participant’s genetic risk of dementia by looking for 27 genes heavily linked to the disease.

Volunteers were grouped into either high, intermediate or low risk brackets, depending on which APOE variants they carried.

The gene is thought to be linked to around 50 per cent of cases of Alzheimer’s – the most common form of dementia.

All of the participants were then separated into three different groups based on how healthy their lifestyle was considered to be.

They were asked about whether they smoked, had depression or diabetes, were physically active, had a healthy diet and avoided social isolation.

All of the factors have been linked to dementia, which strikes around 850,000 people in the UK and around six million in the US, figures show.

Up to a third of all cases are considered to be potentially preventable because they are linked to diet, inactivity or a poor brain health.

Participants who admitted to two or less of the unhealthy habits were considered to have a ‘favourable’ lifestyle.

In comparison, those who said they had five were coined to have an ‘unfavourable’ lifestyle. There was also an intermediate group.

Results showed participants with an ‘unfavourable’ lifestyle had a 32 per cent higher risk of dementia than those with a healthier one.

The odds remained similar – 29 per cent – after the researchers took into account parental history of the disease and cardiovascular risk factors.

The findings also showed a healthy lifestyle protected people at low or intermediate risk of dementia far more than those considered at high risk.

For example, participants who had a low chance of getting the disease had a 2.5-fold higher risk of dementia if they had an unfavourable lifestyle.

Results showed the same risk was 39 per cent higher among volunteers at intermediate risk – but only five per cent greater in high-risk participants.

The team said further trials are needed to confirm the results, and said the study did not take into account how lifestyles change over time or prove a causal link.

It comes after the World Health Organization said in May that people should exercise more, eat a healthy diet and cut down on alcohol to reduce their risk of dementia.

A huge review of existing evidence found age was the strongest risk factor for the memory-robbing condition – but said it is not an inevitable consequence of ageing.

Although it can’t be cured, people who take good care of themselves may have lower odds of getting it – it is not inevitable, the report said.

Although the quality of evidence to back up many of the WHO’s recommendations was low, most were recommended to improve general health.

WHAT IS DEMENTIA? THE KILLER DISEASE THAT ROBS SUFFERERS OF THEIR MEMORIES

Dementia is an umbrella term used to describe a range of progressive neurological disorders, that is, conditions affecting the brain.

There are many different types of dementia, of which Alzheimer’s disease is the most common.

Some people may have a combination of types of dementia.

Regardless of which type is diagnosed, each person will experience their dementia in their own unique way.

Dementia is a global concern but it is most often seen in wealthier countries, where people are likely to live into very old age.

HOW MANY PEOPLE ARE AFFECTED?

The Alzheimer’s Society reports there are more than 850,000 people living with dementia in the UK today, of which more than 500,000 have Alzheimer’s.

It is estimated that the number of people living with dementia in the UK by 2025 will rise to over 1 million.

In the US, it’s estimated there are 5.5 million Alzheimer’s sufferers. A similar percentage rise is expected in the coming years.

As a person’s age increases, so does the risk of them developing dementia.

Rates of diagnosis are improving but many people with dementia are thought to still be undiagnosed.

IS THERE A CURE?

Currently there is no cure for dementia.

But new drugs can slow down its progression and the earlier it is spotted the more effective treatments are.

Medicinal Cannabis Oil Available on Prescription in the UK