A dog lover has praised her pet greyhound for saving her life as he helped detect a lime-sized cancerous tumour in her left breast.

Amanda Evans-Nash, 50, who works for British Airways, was lying in bed one morning, when her pooch Jimmy – a 10-year-old rescue dog – jumped up and started pawing and sniffing at her chest.

When Amanda, from Prestwich, Greater Manchester, pushed her pooch away, her hand brushed against a lump in her left breast, which she had not previously noticed.

Amanda sought medical advice for the lump, which she named Damien after the boy in The Omen horror film, and was diagnosed with a triple negative breast cancer. 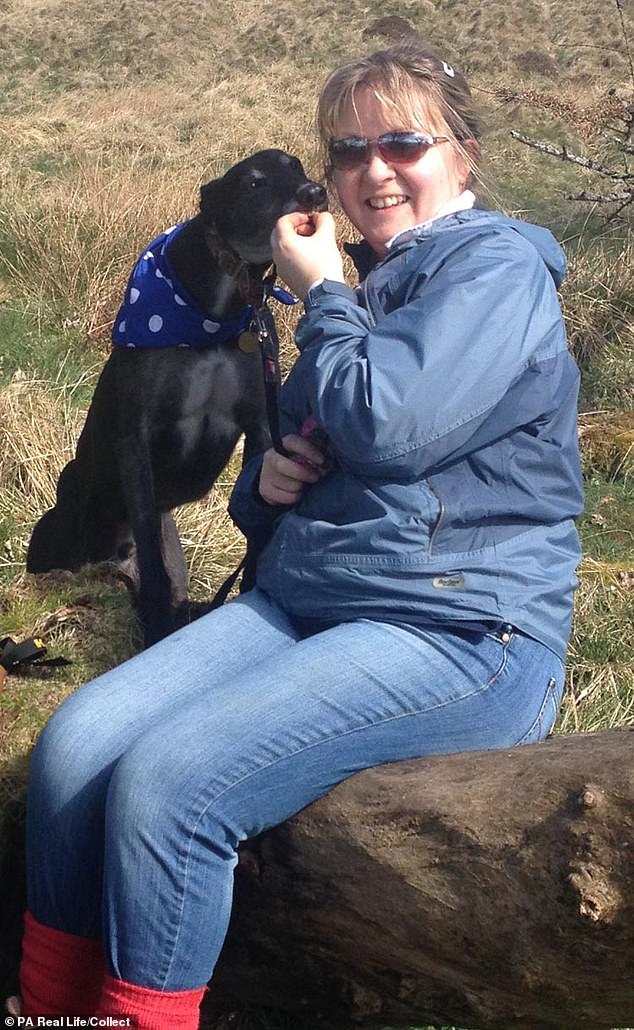 Amanda Evans-Nash, 50 from Greater Manchester, has praised her greyhound Jimmy for saving her life, after he sniffed out a cancerous tumour in her chest in 2017

Amanda, whose husband, Graham Nash, 53, works for Marks and Spencer, now wants to raise awareness of the condition.

She said: ‘My cancer was very sizable, aggressive and already spreading. Who knows what the outcome of my story would’ve been if it wasn’t for Jimmy and his persistent sniffing that morning?

Her experience adds weight to findings of a study by US firm BioScentDx, released earlier this year, which showed that dogs – known to have smell receptors 10,000 times more accurate than humans – could sniff out blood samples from people with cancer with almost 97 per cent accuracy.

Amanda has insisted she was first made aware of her cancer on one morning in June 2017 when she was lying in bed with her four legged friend.

She said: ‘He just wouldn’t leave me alone. It was really tickling me, so I reached over with my right hand to gently push him away – and when I did, I felt a lump under my left nipple.’

To her horror, when she examined herself in the mirror, the lump was clearly visible and Amanda immediately began to fear the worst.

First thing the next morning, she saw her GP, who told her it could simply be a cyst, but referred her to Ninewells Hospital in Dundee, Scotland, near where she was living at the time.

Amanda was told it would be around two weeks before she could be seen.

She swiftly returned to work and told her boss, who kindly helped her to call local private hospitals, before landing an appointment that day at 1pm at the BMI Ross Hall Hospital in Glasgow. 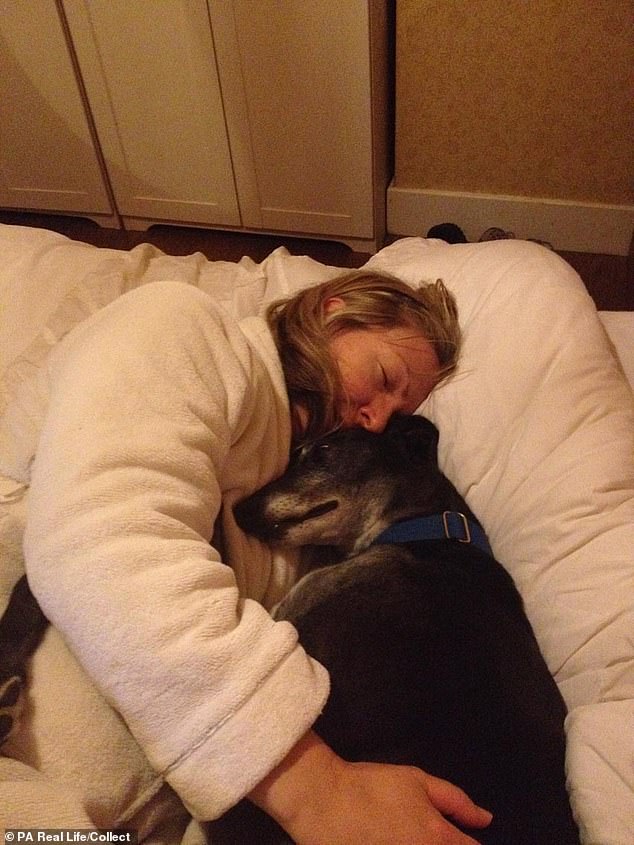 ‘By 6pm I had been diagnosed with breast cancer,’ she said.

‘Graham had been waiting for me in a different room, but when I got the diagnosis. I felt numb.

‘I could barely look at him for fear of breaking down. When I came back into the room, he gave me this look as if to say, ‘So? Any news?’

‘All I could do was shake my head.’

Amanda was given an urgent referral back to Ninewells, where she had a biopsy to determine exactly what sort of breast cancer she had, and whether it had spread.

The results confirmed she had triple negative invasive ductal carcinoma breast cancer, which is an uncommon form of the disease.

The symptoms of which include changes in the size, shape or feel of the breast, dimpling of the skin, a rash on the nipple and surrounding area and swelling in the armpit.

Amanda’s main tumour was the lime-sized growth she had originally felt, but another smaller one was also found at the top of her breast. The cancer had also spread to her lymph nodes.

‘After my diagnosis, I cried solidly for about two days, but I have always tried to see the positive, and use humour to get through,’ she continued.

‘And eventually I realised that sinking into my pyjamas and watching Jeremy Kyle all day wasn’t going to get me better.

Then, on the way to her first chemotherapy session at Perth Royal Infirmary, about two weeks after her diagnosis, something remarkable happened.

Amanda said: ‘My dad Gerry Evans had only died in the October before I was diagnosed, and at his funeral, I read a poem called ‘Look for Me In Rainbows.’

‘As I drove up to Perth, I saw a huge rainbow overhead – and I’ve seen one a few times since then before appointments.

‘People may say it was just a coincidence, but it was still comforting.

‘To me, it was Dad watching over, saying, ‘You’re going to be alright, kid.’

Btu Amanda was adamant she was not going to let cancer beat her, and to regain some control she shaved her head, rather than enduring the emotional pain of watching it fall out bit by bit.

Following 18 weeks of chemotherapy, which ended in November 2017, she had surgery in January 2018.

As the treatment had shrunk her tumour she did not need a mastectomy, instead she had a wide local excision, where just the lump and some healthy tissue around it was cut away.

Doctors also removed 29 lymph nodes and sent them away for a biopsy, to find out if the cancer had spread any further.

As she waited for the results Amanda underwent six weeks of radiotherapy, which finished in April 2018.

Thankfully, Amanda was given the all clear, after results showed her lymph nodes were cancer-free.

She said: ‘I still have some pain in my breast, because of all the scar tissue, but apart from that and some aching in my joints, which I’m told can be a side-effect of chemo, I feel amazing.

In May, as a way of repaying the ‘fantastic’ care she received and to raise money as well as awareness of the form of breast cancer, Amanda and some of her friends took part in Walk the Walk’s annual MoonWalk.

The MoonWalk sees thousands of men and women take to the streets and walk 26 miles through the night in specially decorated bras. 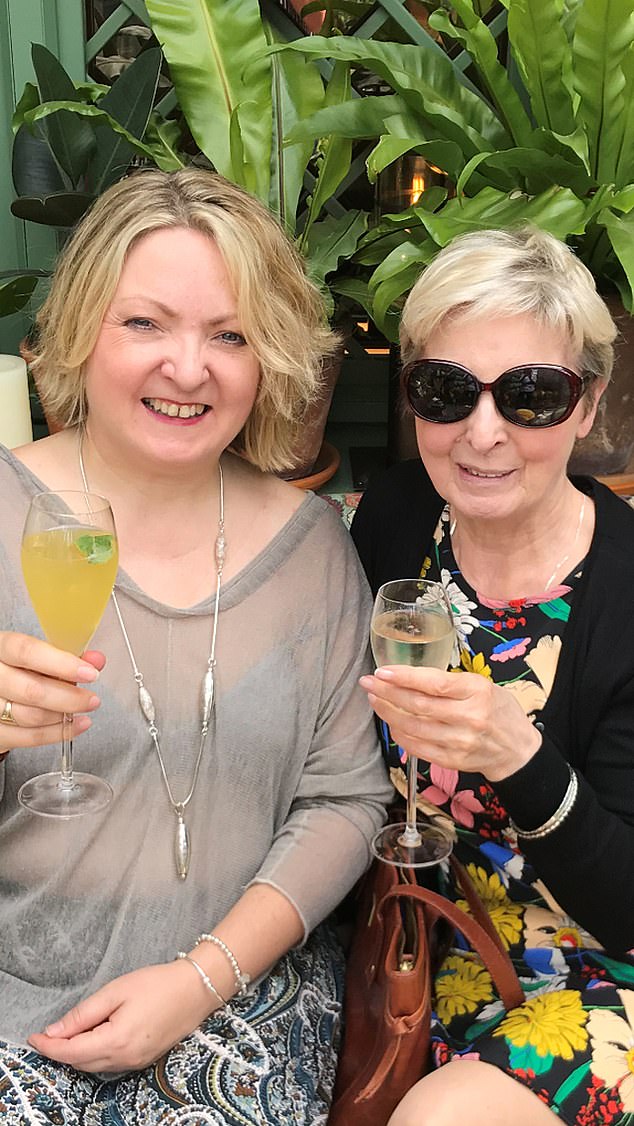 ‘We called our team The Pinky Promises because during treatment, my two little cousins made me pinky promise to be brave, to do what the doctors said and not to cry,’ she added.

Feeling healthy once more, Amanda is now awaiting her five year all clear mark, after which the risk of her cancer returning will be lowered.

In the meantime, she has vowed to do all she can to encourage others to check their breasts.

Amanda has nothing but praise for her dog who saved her life.

‘It still astonishes me how I could have missed the tumour, but Jimmy found it,’ she said.

‘He’s ten years old now, and we got him from a greyhound rescue centre we used to volunteer at. He was always my favourite, so I was delighted to be able to bring him home.

‘Now, I want to get people talking. Far too often, people will say they had no idea there were so many types of breast cancer.

‘Triple negative, especially, which is what I had, has a long way to go as far as research is concerned. It is more difficult to treat, as you can’t use hormone treatments, and it only makes up around 15 per cent of breast cancer cases, according to Cancer Research UK, so it is relatively rare.

‘But the more people talk, the more they will survive.’

The MoonWalk London 2020 takes place on Saturday 16 May. To find out more or to sign-up to take part visit walkthewalk.org