A blood test for signs of inflammation in young people may predict their risks of heart disease and an early death, a new study suggests.

Researchers at Sloan Kettering Cancer Center found that measuring a kind of blood sediment could signal the health risks people will face up to 40 years in advance.

Those who had more sediment-heavy blood – a sign of inflammation – were over a third more at-risk than their peers.

The simple blood test could provide a much-needed motivation for doctors to target and get patients on healthier lifestyle plans early in life if the screening reveals they are at risk. 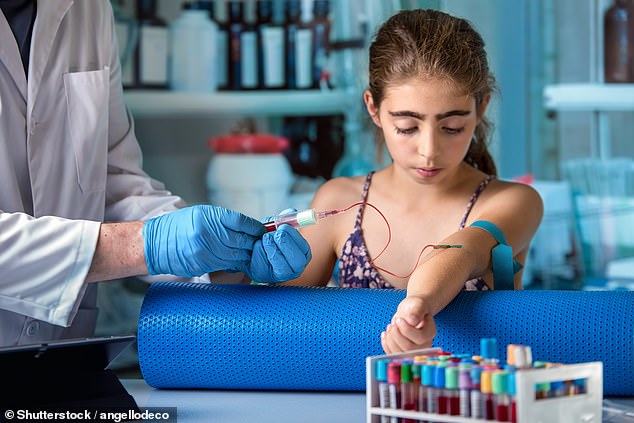 A blood test for inflammation may help doctors predict early death and heart disease up to 40 years in advance, a new study suggests

The test measures how quickly red blood cells, or erythrocytes, settle at the bottom of a test tube. A faster than normal rate indicates inflammation.

The study of 18- to 20-year-olds found mortality rates increased by 36 percent among those with a high ESR (erythrocyte sedimentation rate).

They were followed up to the age of 57. In particular, deaths from cancer and cardiovascular disease rose by 78 and 54 percent, respectively.

She said: ‘Results demonstrate the need to better understand the role of sub clinical early life inflammation in relation to later-life health outcomes.’

They underwent physical and psychological examinations and provided blood samples and were tracked for death until January 1, 2010.

‘Despite increasing interest in the role of childhood and adolescent exposures in later life disease, little is known about the long term implications of early inflammation.’

The participants were ostensibly healthy and inflammation was measured by ESR, she explained.

Dr Kantor said: ‘The threshold from moderate to high ESR corresponds to the clinical cutoff for normal ESR among adolescents and men in this age group.’

During the period of observation there were 4,835 deaths including 1,105 and 874 due to cancer and CVD, respectively.

Dr Kantor said: ‘This study used a blood marker of inflammation to assess the association of inflammation in late adolescence with death among a group of apparently healthy men who had blood drawn for compulsory conscription in the Swedish Army and who were observed up to age 57.’

There were also 280 deaths from alcohol and drugs and 1,502 caused by suicide, traffic collisions or falls. But no statistical link was identified between these and ESR.

Dr Kantor said: ‘In this large study, we observed inflammation during late adolescence to be positively associated with premature mortality due to cancer and CVD.’

The exact underlying mechanisms are unclear. But inflammation has been implicated in the development of both cancer and hardening of the arteries – known medically as atherosclerosis.

Dr Kantor went on: ‘These data highlight the existence of detectable markers of premature mortality at an early stage of life.’

The link between high ESR and premture death remained after taking smoking into account, which increased the risk of cancer and CVD.

Currently, doctors can attempt to predict whether a patient is going to die in the next year.

But predicting a patient’s risk over the next three or four decades is much harder to do.

It could lead to healthier lifestyles – and enable specialists to improve how someone is treated for any potential medical condition.

The analyses published in JAMA Pediatrics only included men. It ‘may not be generalisable to women,’ said Dr Kanto