Multiple sclerosis (MS) could be stopped within a decade, according to leading researchers.

A series of scientific discoveries have led to experts calling 2019 ‘the most significant and exciting time we have ever seen’ in treating the disorder.

Scientists say a range of medications for sufferers of the debilitating condition will be in late stage trials by as early as 2025.

MS is thought to affect 100,000 people in the UK, with 14 patients being diagnosed every day, MS Society statistics show.

And in the US, nearly one million are living with the condition, according to the National Multiple Sclerosis Society.

The disorder, which strikes twice as many women as men, damages nerves in the body, causing mobility loss, sight problems, fatigue and pain.

There is no cure, with current treatments focusing on easing symptoms and preventing relapses. 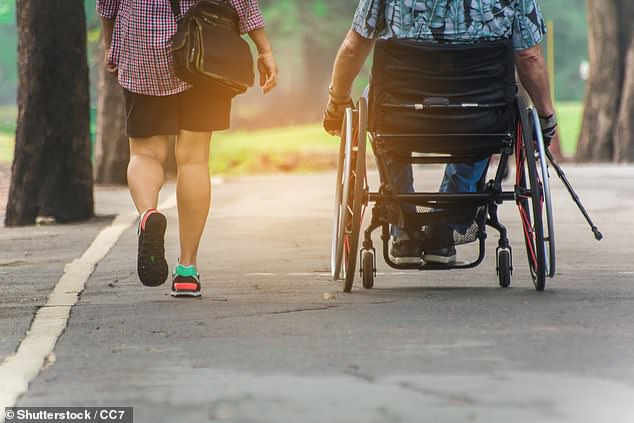 Multiple sclerosis (MS) could be halted within a decade, scientists say on the back of a year full of scientific breakthroughs (file image)

This means that as a person’s condition progresses there is nothing to stop them becoming more disabled.

Professor Alan Thompson, consultant neurologist and chair at the International Progressive MS Alliance, said: ‘In the past decade we’ve made significant progress in treating MS, but there remains a huge unmet need in developing treatments for the progressive form of the condition.

‘Now, for the first time, the international research community has come together and is aligned on what needs to be done to stop the condition, and, with a dramatic increase in investment, we could genuinely change people’s lives.

‘MS is relentless, painful, and disabling, but thanks to research improving our understanding, we’re now able to develop strategies that tackle the condition in new and different ways – including myelin regenerative and neuroprotective treatments – with the ultimate aim of stopping MS.

‘This is the most significant and exciting time we have ever seen in the treatment of neurological conditions.’

Earlier this year researchers discovered a way to regenerate lost myelin – the fatty sheath surrounding our nerves and is damaged in MS.

They then stripped myelin from some of the nerves in the animals’ brain. Results described as ‘spectacular’ showed the rats’ damaged myelin made an almost complete recovery after three weeks on metformin.

Another key milestone has been the discovery of treatments which may to protect nerves from damage.

This includes the use of cholesterol-lowering drugs known as statins. They are currently being tested in the biggest ever trial for secondary progressive MS.

The £6million project, which will be funded by the NHS National Institute for Health Research and the MS Society, offers hope of the first effective treatment for patients with secondary progressive MS – an advanced stage of the illness.

In the early stages, patients normally experience ‘relapsing-remitting MS’, where their condition gets worse and then stabilises in fits and starts.

Around half of those patients develop secondary progressive MS within 15 to 20 years.

At this stage there is no let-up in their decline and they progressively lose muscular function and become more disabled.

Scientists hoping to cure the disorder within the decade have joined a Stop MS appeal by the MS Society, which needs to raise £100 million over a ten year period to accelerate new research.

Professor Anna Williams, an expert in regenerative neurology at the MS Society Centre for MS Research at the University of Edinburgh, said the 10-year commitment was ‘not to be taken lightly’.

She added: ‘MS is a serious condition that can affect every aspect of your life, and the Stop MS Appeal will bring immense hope to millions of people affected.

‘For a national charity and professionals like myself to come out and say we believe it can be stopped, we must be able to deliver on that promise.’

The Stop MS Appeal launches publicly this week with a major advertising campaign.

The money raised will pay for new research and MS clinical trials network, which is currently being developed by leading clinicians and scientists bought together by the MS Society.

This trial will allow researchers to test many potential drugs simultaneously, saving time and money.

Nick Moberly, chief executive at the MS Society, said: ‘Research has got us to a critical point, and we can see a future where nobody needs to worry about MS getting worse.

‘That means not living in fear you’ll be reliant on a wheelchair, or one day lose your independence entirely.

‘The worldwide MS community is coming together to help us achieve our ambitious goal to stop MS. But we need to act now, because people with MS can’t wait.’

WHAT IS MULTIPLE SCLEROSIS?

Multiple sclerosis (known as MS) is a condition in which the immune system attacks the body and causes nerve damage to the brain and spinal cord.

It is an incurable, lifelong condition. Symptoms can be mild in some, and in others more extreme causing severe disability.

It is more than twice as common in women as it is in men. A person is usually diagnosed in their 20s and 30s.

The condition is more commonly diagnosed in people of European ancestry.

The cause isn’t clear. There may be genes associated with it, but it is not directly hereditary. Smoking and low vitamin D levels are also linked to MS.

The majority of sufferers will have episodes of symptoms which go away and come back, while some have ones which get gradually worse over time.

Symptoms can be managed with medication and therapy.

The condition shortens the average life expectancy by around five to 10 years.

Marijuana sales in Illinois have spiked during the coronavirus pandemic, raking in more than $200 million since March