Alzheimer’s could be halted with treatment which eliminates cells produced by the immune system, scientists claim.

The research at Washington University suggests that suppressing microglia might prevent or delay the onset of the memory-robbing disease.

However, a leading charity said the research, although promising, was too preliminary to get excited. 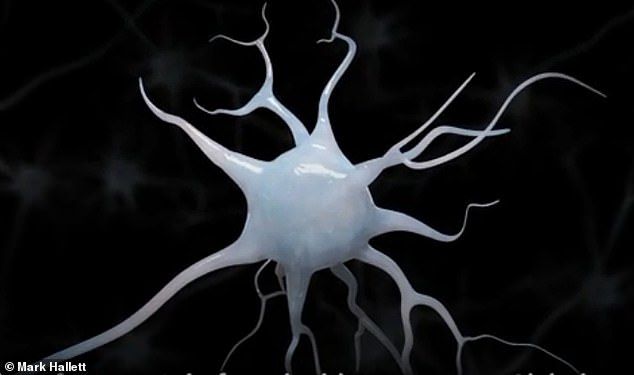 Alzheimer’s could be halted with treatment which eliminates cells produced by the immune system, scientists claim. Pictured, a healthy neuron in the brain of an Alzheimer’s sufferer

Protein known as tau begins to clump together. This is a hallmark sign of Alzheimer’s 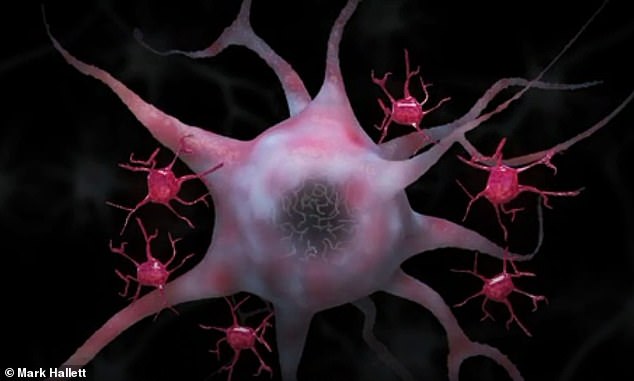 But in trying to kill of the tau, the microglia actually damage the neuron, which accelerates the degenerative process

Professor David Holtzman, lead author of the study, said: ‘If we could find a drug that specifically deactivates the microglia just at the beginning of the neurodegeneration phase of the disease, it would absolutely be worth evaluating in people.’

Until now, Professor Holtzman, a neurologist, believed that microglia were helpful in slowing the speed of dementia.

Found in the brain and spinal cord, the cells are one of the main forms of immune defense in the central nervous system.

Microglia attacks tau tangles, which are clumps of protein in the brain believed to play a role in the cause of dementia.

In fit and healthy humans, the presence of tau protein is perfectly normal and even contributes to the proper functioning of neurons.

Professor Holtzman’s and colleagues found evidence that microglia attacks the tau with such ferocity that it inadvertently destroys neurons.

They achieved this breakthrough in the field’s understanding of Alzheimer’s by observing the neurodegeneration process in mice.

Half of the rodents were genetically modified with a protein called Apolipoprotein E4 (APOE4) which is strongly correlated with Alzheimer’s in people.

Every human carries APOE, but those who have the APOE4 strand are 12 times more likely to contract the disease.

From the age of six months, some of the mice which had been modified with APOE4 were also fed an inhibitor compound called PLX3397 to kill off their much of their microglia.

When the mice were nine months old, those with the APOE4 and a normal presence of microglia showed severly shrunken brains.

In contrast, the brains APOE4 mice without microglia were still healthy, according to the findings published in the Journal of Experimental Medicine,

Professor Holtzman said: ‘If you could target microglia in some specific way and prevent them from causing damage, I think that would be a really important, strategic, novel way to develop a treatment.’

But the application to humans seems far off, as the PLX3397 compound used to deplete microglia in mice has side effects of hair colour changes, fatigue, nausea, diarrhoea and vomiting.

Dr James Pickett, Head of Research at Alzheimer’s Society, said: ‘There is a growing body of knowledge that suggests the immune system might play a key role in the development of Alzheimer’s disease.

‘This research builds on this theory but while promising, this work is still at a very early stage – it was a small study in mice that did not look at the impact of these techniques on memory and thinking abilities.

‘Further in-depth research is needed to establish the exact role of the immune system in Alzheimer’s disease and our scientists are taking steps to explore every avenue that may one day bring hope to people affected by dementia.’

The findings were published in the Journal of Experimental Medicine.

Was this mission personally approved by Elon Musk? SpaceX will include cannabis and coffee plants in its 20th cargo resupply trip to the ISS