7-Eleven has jumped on the CBD bandwagon and is using an AI-powered robot to help.

Convenience stores across Colorado will soon roll-out cannabidiol dispensing robots for patrons to purchase products via a touchscreen and in under three minutes.

Boulder and Denver are the first cities to receive the CBD-dispensing robots, which were designed to also entertain and educate customers on the benefits of the cannabis-based products. 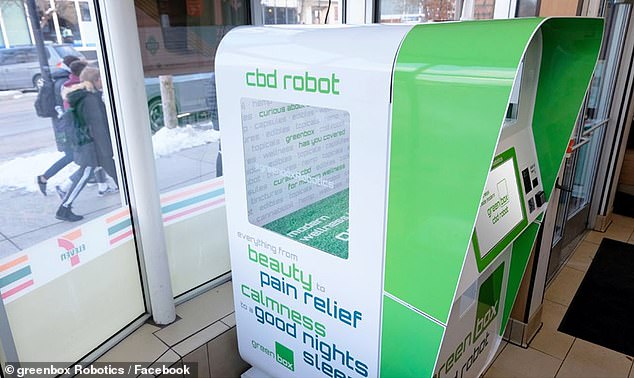 7-Eleven has jumped on the CBD bandwagon and is using an AI-powered robot to help. Stores across Colorado will soon roll-out cannabidiol dispensing robots for patrons to purchase products via a touchscreen and in under three minutes

CBD, or cannabidiol, is certainly trendy right now, and its sellers insist it may be very useful in treating things like pain, anxiety and epilepsy.

The AI-powered robots were developed by Greenbox Robotics and allow consumers to purchase products via a touchscreen – saving them a trip to the dispensary.

‘We are bringing a $55-billion-plus industry over the counter with a simple consumer touch.’

Johnson also explained that the firm approves every product prior to placing it inside the firm’s robots, according to Cheddar.

Now, 7-Eleven has employed this technology at select locations in an effort to draw in more customers, with the hopes they spend more time (and money) in the store.

Only two stores in the state currently have a CBD-dispensing robot, one is located near the University of Colorado campus and Fox Theater in Boulder.

Kenneth Monfort, the owner of the Boulder location and other locations in Colorado, told Cheddar: ‘I believe that adding Greenbox to our 7-Eleven stores will add value, intrigue, and delight our customers while reducing shrinkage.

‘We trust Greenbox to curate the CBD collection we offer our customer base.’

This specific location is part of the pilot program, but both Monfort and Greenbox hope to unleash the robots in more locations across the state.

‘What we’re looking for is to generate sales and show 7-Eleven corporate that this is a value add, we’re introducing a product that is protected, not on shelves to risk theft, but we are also looking to generate sales for you in your store beyond just the CBD product,’ Johnson said.

‘[7-Eleven] has been known to invest into things that increase sales for their retailers. We’re hoping that with this pilot program, we can be on their radar through Monfort and explore 7-Eleven investing into Greenbox,’ he later added.

Greenbox’s robots are used to dispense multiple types and strains of cannabis products, from edibles to flower to CBD, all over Colorado.

The technology is designed to monitor temperature and shelf life of each product, and collects data on purchasing trends to help Greenbox understand what consumers want.

The marijuana plant is made up of some 480 natural component parts, including 66 chemicals that aren’t found in any other flora. These are called cannabinoids.

Cannabinoids are divided into six subgroups, including the two best-known sets, cannabidiols (CBD) and tetrahydrocannabinols (THC).

THC and CBD are sort of the yin and yang of marijuana.

Each acts differently on the body because each has its own unique chemical shape that allows it to bind to receptors in our central nervous system.

When it binds with our receptors for it, THC is responsible for the ‘high,’ psychoactive feeling and euphoria associated with marijuana.

CBD has nothing to do with that effect.

Instead, it binds to its own receptors and actually blocks the effects of the most powerful form THC takes as it gets metabolized.

CBD doesn’t have psychoactive effects and is thought to soften the less pleasant side effects of THC, like anxiety and paranoia. 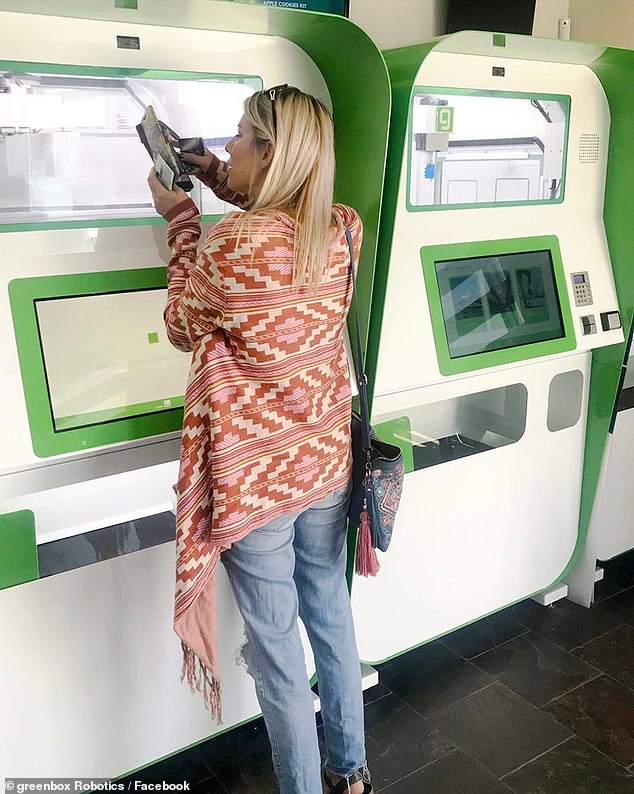 Boulder and Denver are the first cities to receive the CBD-dispensing robots, which were designed to also entertain and educate customers on the benefits of the cannabis-based products

It’s unclear whether CBD itself has as the ‘relaxing’ effect promised inside cups of caffeinated CBD latte.

It does bind with central nervous system receptors, and some evidence has suggested that the cannabinoid receptor system is involved in our stress and anxiety responses.

But no one has been able to empirically, definitively show that this is more than a placebo effect.Cannabidiol (CBD) helps reduce seizures in epileptic patients.

The Latest in Cannabis Research This Winter 2018/19