Routine exercise may drastically slash your chances of getting depression – even if you are genetically at risk.

Scientists found adults who took part in four hours of exercise each week were 17 per cent less likely to develop the mental health condition.

Even as little as 30 minutes a day of physical activity may have a positive effect, Harvard University researchers discovered.

And activities including yoga and dance classes appeared to offer as much benefit as working up a sweat in the gym. 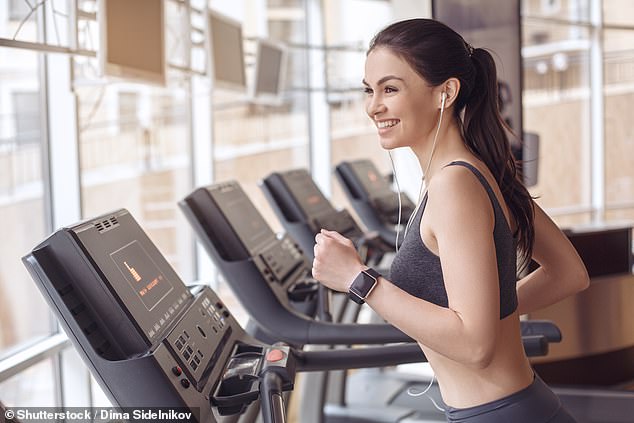 Four hours of weekly exercise can cut the odds of depression by as much as 17 per cent, but even just 35 minutes daily will help stave off the blues (file photo)

On enrolling at the Biobank, the participants answered a survey about their lifestyle habits, including their level of exercise.

Over two years, researchers cross-referenced this information with patient health records and spotted those diagnosed with depression.

The authors also used participants’ genetic information to calculate a single score that reflects a person’s inherited risk for depression.

Results published in the Depression and Anxiety journal, showed people with a higher genetic risk were 20 per cent more likely to be diagnosed with depression.

However, if people in this group exercised they were 17 per cent less likely to get depression than adults who were at low genetic risk but didn’t exercise. 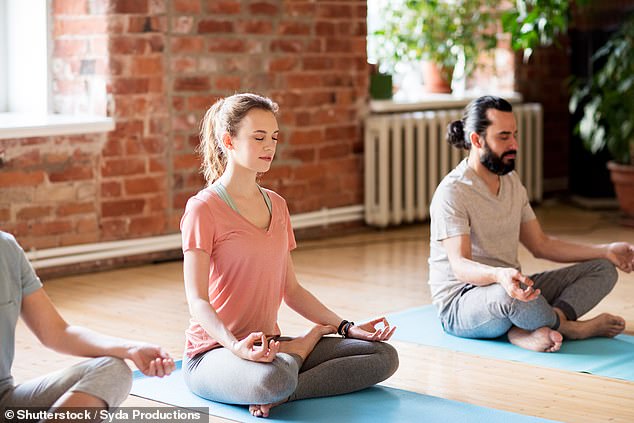 Working up a sweat in the gym is not the only way to improve your chances of avoiding the disease, for light yoga and stretching can also be beneficial (file photo)

Of the exercises, running and walking were both found to reduce one’s chances of depression, by 13 per cent and 11 per cent respectively.

The NHS recommends regular exercise for for people with mild to moderate depression, with GPs often prescribing physical activity as a treatment.

Three hour-long sessions every week for between 10 to 14 weeks is recommended by the National Institute for Health and Care Excellence for depression sufferers.

Everyone is advised to do 150 minutes of moderate-intensity activity each week to stay fit.

Dr Michael Craig Miller, assistant professor of psychiatry at Harvard Medical School, said that for some of the planet’s 100million depression sufferers, exercise ‘works as well as antidepressants’.

In the short term, exercising releases feel-good endorphin chemicals, and in the long term, persistent activity incurs the proteins which improve brain function and mood.

While it is normal to feel down from time to time, people with depression may feel persistently unhappy for weeks or months on end.

Depression can affect anyone at any age and is fairly common – approximately one in ten people are likely to experience it at some point in their life.

Depression is a genuine health condition which people cannot just ignore or ‘snap out of it’.

Symptoms and effects vary, but can include constantly feeling upset or hopeless, or losing interest in things you used to enjoy.

It can also cause physical symptoms such as problems sleeping, tiredness, having a low appetite or sex drive, and even feeling physical pain.

In extreme cases it can lead to suicidal thoughts.

Traumatic events can trigger it, and people with a family history may be more at risk.

It is important to see a doctor if you think you or someone you know has depression, as it can be managed with lifestyle changes, therapy or medication.