GP patients will have their entire genome screened to find early clues of disease in a study.

Researchers will assess how 20 patients over the age of 30 cope psychologically to their results before it begins to use it nationally.

If successful, it could pave the way towards more routine genetic testing to predict and manage patients’ future health in the NHS.

Genetic screening is able to identify faulty genes which increase the risk of cancers, such as breast and prostate, and heart diseases.

In turn, patients can be given lifestyle advice on how they can help prevent the diseases from developing or start treatment as soon as possible.

It comes amid a rise in popularity of over-the-counter genetic testing kits that can be done at home using a tube of spit.

But researchers say this method, called Whole Genome Sequencing (WGS), is far more reliable because it uses blood samples instead of saliva and has the support of geneticists and counsellors. 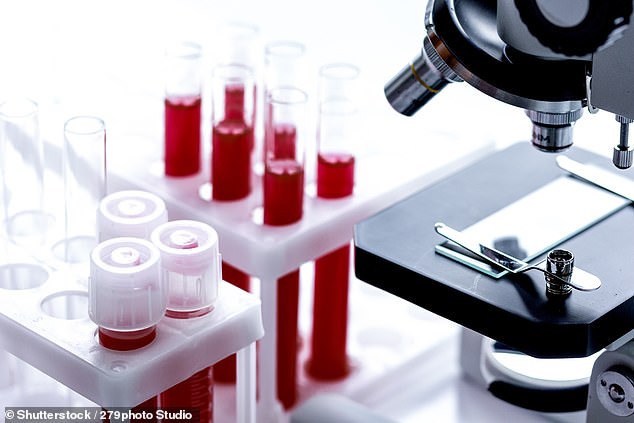 GP patients will have their entire genome screened to find early clues of disease in a study. It will use blood samples, instead of saliva, to get more reliable results than home-testing kits (stock image)

Home-testing kits have been slammed in the past for leaving the NHS ‘picking up the pieces’ when consumers misinterpret their results.

The ’90S study’ will be led by Professor Ros Eeles, an expert at the Institute of Cancer Research (ICR), London, and The Royal Marsden NHS Foundation Trust.

Dr Michael Sandberg, a GP at 90 Sloane Street – a private practice from which patient volunteers will be recruited – is also spearheading the research.

His clinic already offer the testing privately for £5,000 – far more than home-testing kits which can be bought for under £100.

But WSG ‘differs fundamentally’ from these tests because they will use a blood sample, which they say will reduce the occasional failure of using saliva.

A consultant geneticists will discuss any abnormal results to avoid the patient feeling confused – a common occurrence for home kits.

Patients will also have tests such as a heart ultrasound or echocardiogram, the team said, to provide extra data to reassure those with some genetic risk of heart disease who have no physical symptoms.

Half the participants will have a family history of cancer or heart disease so the researchers can assess how frequently genetic alterations are picked up compared with the other half of the group.

If the study is success, it will expand to 1,000 GP patients in London, and multiple NHS trusts at a later stage.

Professor Eeles said: ‘What we hope is that genetic screening is practical as a way of picking up genes associated with cancer and heart disease, is psychologically acceptable to patients, and can alter the way they are managed by their GP.

‘The project will give us crucial information about whether genetic screening in primary care could be feasible, and how we should go about seeking to implement it within the NHS.’

Professor Eeles said home-testing kits can only give a general pattern, like ‘looking up at the Milky Way in the sky’. But the WGS is like a ‘scribe writing your whole genome from beginning to end’.

The human genome consists of approximately 20,000 genes. A technique called SNP profiling is able to search the genome for alterations in these genes that signify disease risk.

The team say up to six people in 100 will be told they have gene alterations in which there may be an increased risk for certain cancers or heart disease.

They will report on 600 genetic changes known to be linked with disease, or which can have an effect on the way patients respond to specific medicines.

For example, they will screen for 15 different breast cancer gene which put patients at up to eight times higher risk of the disease than the normal population.

Much progress has been made in identifying inherited causes of disease, such as the BRCA gene faults which increase the risk of breast and ovarian cancer.

Results will enable patients to make choices including lifestyle improvements, having screenings more often and maybe receive targeted treatments – such as a mastectomy.

Not all genes are ‘actionable’ – meaning there is not medicine that can change the outlook – and therefore are not included. For example Alzheimer’s.

Until now, only patients with a family history of disease have been offered any form of genetic screening.

Professor Eeles said: ‘We have been very clear we will not feed back results for which we cannot give clear guidelines of how you would alter a patient’s management.

‘That’s very, very important – we want medicine that’s going to help patients, not find things that might increase their worry and for which we really don’t have any management at the moment.’

WHAT IS WHOLE GENOME SEQUENCING?

Whole genome sequencing allows researchers to read all the little bits of code that make us who we are.

The human genome is composed of more than three billion pairs of building-block molecules and grouped into some 25,000 genes.

It contains the codes and instructions that tell the body how to grow and develop, but flaws in the instructions can lead to disease.

Chief medical officer Dame Sally Davies wants to set up a central genetic database within the next five years to aid research.

She said genetic testing should become as routine as an MRI scan, although patients would have the opportunity to opt out.