Artificial intelligence that can help diagnose breast cancer more accurately than trained doctors could save thousands of lives, according to new research.

A computer algorithm developed by British and US scientists has slashed the number of missed cases from almost one in ten (9.4 per cent) to just one in thirty-seven (2.7 per cent) by spotting tumours radiologists don’t see.

The breakthrough has been likened to ‘a spell-check for writing email’ and could reduce the number of ‘false negatives’ that can lead to life threatening delays in treatment. 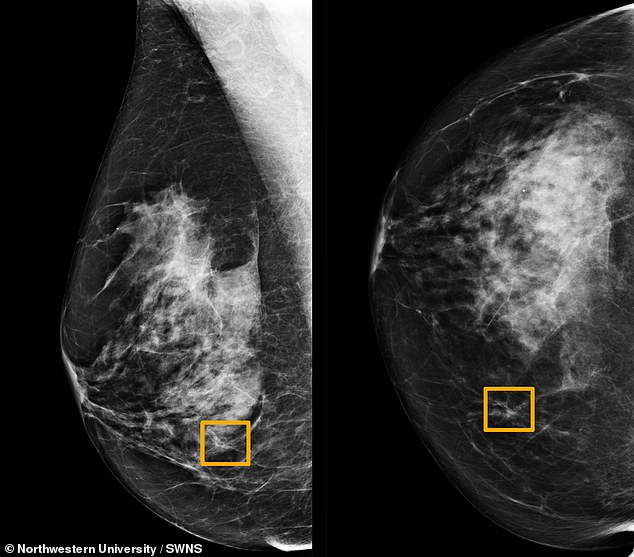 A computer algorithm (left and right) developed by British and U.S. scientists can help diagnose breast cancer more accurately than trained doctors, according to new research

The trial found incidents were reduced from about one in eighteen (5.7 per cent) to nearly one in a hundred (1.2 per cent).

Study co author Dr Mozziyar Etemadi, an assistant professor of anaesthesiology at Northwestern University, Chicago, said: ‘This is a huge advance in the potential for early cancer detection.

‘Breast cancer is one of the highest causes of cancer mortality in women. Finding cancer earlier means it can be smaller and easier to treat. We hope this will ultimately save a lot of lives.’

The machine learning device was designed and trained using mammography images mostly from women in the UK and correctly identified cancers better than experts.

When tested on 25,856 unidentified women screened on the NHS at three hospital trusts and 3,097 at Northwestern Medicine, there were far fewer cases of cancer incorrectly identified – or missed.

The results published in Nature demonstrates how AI could ‘potentially be applied in clinical settings around the world,’ said the researchers.

Compared to actual clinical practice and the opinions of six independent radiologists, missed tumours plunged from 9.4 to 2.7 per cent with AI and incorrect identification of cancer also fell from 5.7 to 1.2 per cent. 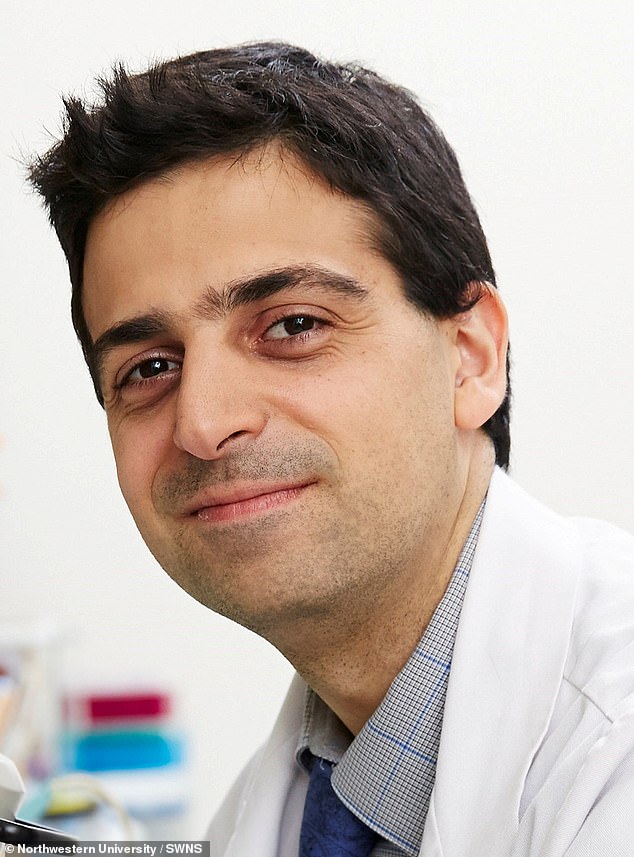 Study co author Dr Mozziyar Etemadi (pictured), an assistant professor of anaesthesiology at Northwestern University, Chicago, said the tool was a ‘huge advance in the potential for early cancer detection’

The software also correctly picked up cancers in the screening images with a similar degree of accuracy as the experts.

Currently, two experts review breast screening scans but the system is not perfect, as it can miss some cases and pick up ones that would not have gone on to cause problems.

Breast cancer is the most common type of cancer in women globally, occurring in about one in eight women.

At present, mammography is the most widely used breast cancer screening tool, but diagnosing cancer from these images is a challenge and one in five cases are missed by radiologists – twice the rate of that in the study.

What is more, about half of women who undergo screening over a ten year period will experience a false positive in which cancer is wrongly suspected.

Co-lead author Scott McKinney, a software engineer at Google Health in California, said: ‘Computers are really good at these tasks. We hope someday this tool for radiologists becomes as ubiquitous as spell-check for writing e-mail.’

AI tools could now support clinical decision-making in the future and relieve pressure on healthcare systems by reducing workload.

Dominic King, UK lead at Google Health, London, said: ‘Our team is really proud of these research findings, which suggest we are on our way to developing a tool that can help clinicians spot breast cancer with greater accuracy.

‘Further testing, clinical validation and regulatory approvals are required before this could start making a difference for patients, but we’re committed to working with our partners towards this goal.’

Women aged between 50 and 71 are invited to receive a mammogram on the NHS every three years, where an x-ray of the breast tissue is used to look for abnormal growths or changes which may be cancerous.

While screening is highly effective and the majority of cancers are picked up during the process, even with significant clinical expertise human interpretation of the x-rays is open to errors.

Co-author Professor the Lord Ara Darzi of Denham, of Imperial College London, said: ‘Screening programmes remain one of the best tools at our disposal for catching cancer early and improving outcomes for patients, but many challenges remain – not least the current volume of images radiologists must review.

‘While these findings are not directly from the clinic, they are very encouraging, and they offer clear insights into how this valuable technology could be used in real life.

‘There will of course a number of challenges to address before AI could be implemented in mammography screening programmes around the world, but the potential for improving healthcare and helping patients is enormous.’

It is estimated more than two million women across the world developed the disease last year – with more than 600,000 deaths.

In the U.S. there will be an estimated 268,600 women diagnosed with breast cancer this year – and around 41,760 deaths from the disease.

Dr Etemadi said: ‘While this is exciting, early-stage research, validation in future trials is needed to better understand how models like these can be effectively integrated into clinical practice.

‘In some examples, the human outperforms the AI and in others, it’s the opposite.

‘But the ultimate goal will be to find the best way to combine the two – the magic of the human brain isn’t going anywhere any time soon.’

By pooling data from 14 trials, the team showed the ‘deep learning’ technology correctly detected disease in 87 per cent of cases – compared to 86 per cent  achieved by trained practitioners.

And the ability to accurately rule out patients who did not have the disease was similar, with 93 per cent for the machine algorithms compared to 91 per cent for doctors.

WHAT IS BREAST CANCER, HOW MANY PEOPLE DOES IT STRIKE AND WHAT ARE THE SYMPTOMS?

Staging means how big the cancer is and whether it has spread. Stage 1 is the earliest stage and stage 4 means the cancer has spread to another part of the body.

The cancerous cells are graded from low, which means a slow growth, to high, which is fast growing. High grade cancers are more likely to come back after they have first been treated.

Cancer tumours in the gut feed off sugary drinks

UK may face an opioid addiction crisis like the US within FIVE YEARS, expert warns as pharmacies are caught handing out addictive painkillers without prescriptions