On New Year’s Day, Illinois began its first legal sales of recreational marijuana to the delight of many, some of whom began lining up hours early at dispensaries.

Hundreds of people formed queues at the nearly three dozen dispensaries with a license to sell recreational cannabis.

Jackie Ryan, of Forest Park, was the first person in the state purchase recreational pot when bought marijuana products from employee Brea Mooney at Sunnyside dispensary in Chicago at 6am.

‘It’s better than Christmas when I got my Barbie dream house,’ Ryan told reporters and photographers.

‘This is great. This is really exciting. This is wonderful.’ 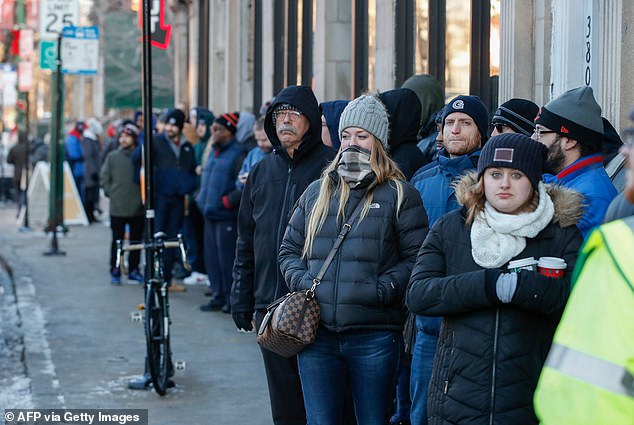 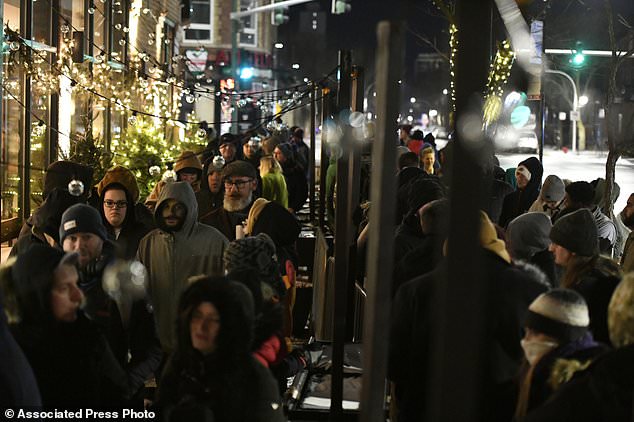 The law allows Illinoisans to have up to 30 grams of cannabis flower and up to five grams (0.17 ounces) of cannabis concentrate. Pictured: A long line of people wait to purchase recreational marijuana at Sunnyside dispensary in Chicago on January 1

Illinois already allowed medical marijuana, but became the 11th state to allow its use and sale for recreational purposes in May 2019.

Pamela Althoff, executive director of the Springfield-based Cannabis Business Association of Illinois, told The Associated Press that she spent much of Wednesday morning in Chicago and the city’s northwestern suburbs.

She said wait times of up to three hours were getting shorter as the day progressed.

‘It has been joyous and well-run,’ Althoff said. ‘People are extraordinarily courteous and civil.’

Police were on-hand at most shops mostly to control traffic.

Althoff cautioned that recreational marijuana may not be consumed in public and added that like all new products, it may be a little expensive.

‘We hope that down the line it will become less expensive,’ she said.

‘The message from the industry is not promoting or opposing, it’s the state of Illinois made it legal and we’re here to provide a safe and a quality product for those who wish to consume. We encourage our customers to be responsible.’ 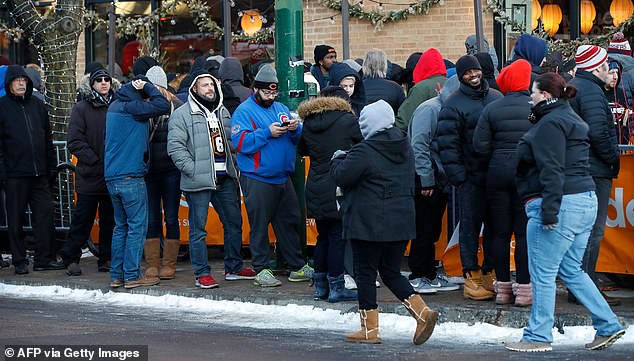 Many people waited in lines outside dispensaries for up to three hours. Pictured: Customers wait in line outside Sunnyside Cannabis Dispensary in Chicago to purchase recreational marijuana on January 1

Mary Yazel-Muska, 65, told the Chicago Tribune that she planned to celebrate her purchase from a dispensary in suburban Mundelein with champagne and edibles at home with her boyfriend.

‘I own a home. I worked for a bank as a fraud investigator for 20 years. I rescue dogs. I volunteer. I take care of my 93-year-old mother. It’s not like we’re all a bunch of hippies.’

Cannabis sales could generate $250 million for Illinois by 2022, according to estimates by state officials.

A key part of the new Illinois law is the expungement of some low-level marijuana convictions. On Tuesday, Pritzker granted more than 11,000 such pardons.

He said clearing the misdemeanor offenses from individuals’ records will make it easier for them to get jobs, housing and financial aid for college.

‘The 11,017 pardons that Gov Pritzker is granting today are thousands of lives forever changed – and hundreds of thousands more will be changed in the coming months,’ said Toi Hutchinson, a former state senator who now is an adviser to Pritzker on marijuana policy.

‘Those who were unfairly targeted by discriminatory drug laws can finally get ahead and build a new future for themselves and their families.’