Scientists have cured an alcoholic of his cravings by zapping his brain with small jolts of electricity.

Canadian researchers trialed the experimental brain surgery on Dr Frank Plummer, who was on the verge of drinking himself to death.

The 67-year-old was a self-confessed alcoholic who claimed he would drink almost an entire 70cl bottle of whiskey every night.

Dr Plummer, a former scientific director of Canada’s National Microbiology Laboratory, said he was in denial about his problem until his liver failed in 2012.

He was given a transplant in 2014, but he continued to drink the spirit every day and his new organ started to lose function.

Dr Plummer, a world-renowned specialist in infectious diseases, said he’d ‘be dead’ if it wasn’t for the pioneering treatment.

He signed up for the trial last year at Sunnybrook Health Sciences Centre in Toronto when therapy and Alcoholics Anonymous meetings failed to curb his addiction.

Medics drilled holes into his head and implanted two electrodes into his brain while he was still awake during surgery. 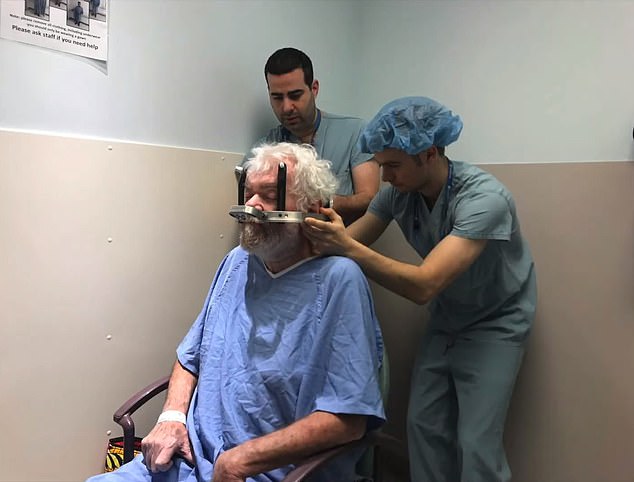 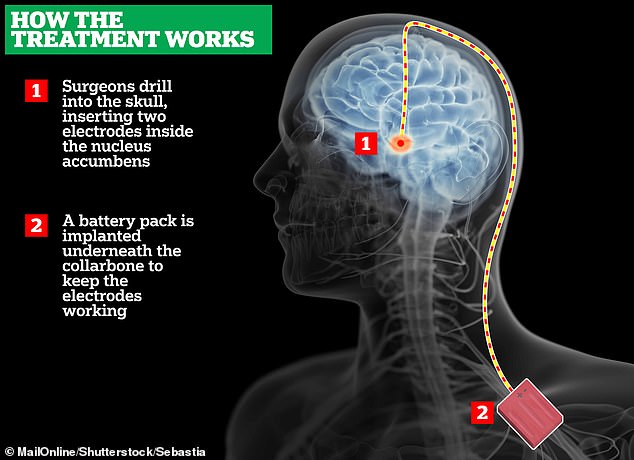 The electrodes are connected to a device, similar to a pacemaker, in the right side of Dr Plummer’s chest.

The device, which costs between $15,000 and $20,000, sends electrical impulses into the nucleus accumbens, an area of the brain linked to addiction and our reward circuit.

This is said to regulate the faulty activity in the brain region which makes addicts crave alcohol.

One year after the operation, his simulator is on around the clock and he’s no longer constantly craving alcohol.

Deep brain stimulation has been shown to work on heroin and opioid addicts – but this is thought to be the first time it has cured alcoholism.

Dr Plummer told CTV News: ‘I used to think about alcohol all the time. I think I was a high-functioning person with a problem with alcohol.

‘I guess I was in denial. It’s pretty obvious now that I look back that I had a problem. If I didn’t get the drinking under control, I was going to die. And I didn’t want to die.’

Any outward signs of Dr Plummer’s addiction were overshadowed by his unwavering success as a physician, researcher and scientific director of Canada’s National Microbiology Lab in Winnipeg.

He completed groundbreaking work for the AIDS epidemic, led Canadian public health through the Ebola virus, SARS and the emergence of the swine flu strain, H1N1.

But Dr Plummer spent his night’s drinking around 20 ounces (60cl) of whiskey to deal with the stress. 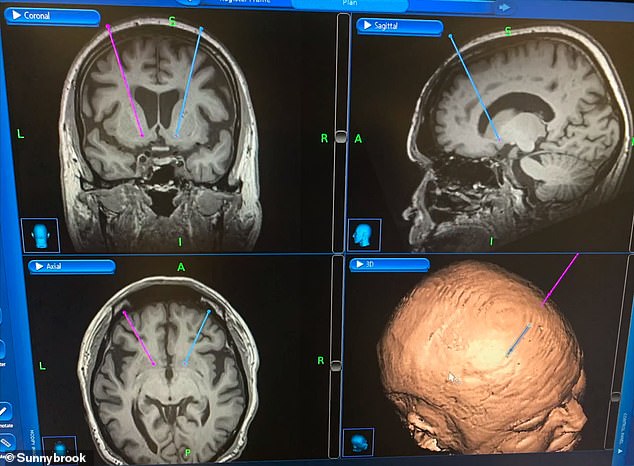 He described how his brain used to be constantly turning on how to get more alcohol. But in his eyes he was managing fine because he never drank during the work day.

This changed in 2012 when Dr Plummer  found out he had cirrhosis and end-stage liver disease.

He received a liver transplant in 2014 and the new liver was ‘magical,’ but the retired doctor found himself falling back into his bad habits.

‘I kept on thinking as we went through this, you know, he’s the smartest man in Canada,’ she said.

Dr Nir Lipsman, one of the people working on this project, said: ‘So we’re inserting electrodes directly into that region of the brain in an effort to reset its activity, to recalibrate it in some way.’

Dr Lipsman revealed six patients in total will take part in the pilot study. Three, including Dr Plummer, are currently living with the device in their chest and will be monitored over the course of the research. The other three will start in the next year.

From Dr Plummer’s point of view, participating in this study is more than just a life saving measure – it’s a contribution to science.

He said: ‘I spent my whole life doing research, and here’s a different way of doing research. Be a participant, rather than the study director.’

Dr Lipsman said the level of treatment exemplified in this test trial was reserved for patients whose addiction was on the verge of killing them.

He said: ‘Frank is really a typical example. Somebody that has been through a transplant, been through medical treatment and despite that is still affected by his addiction. So those are the kind of patients that we enroll for this particular trial.’

There are some risks of infection and bleeding with brain surgeries, but thus far researchers on the trial say the first three patients are doing well.

Dr Lipsman said: ‘There are encouraging signs that we’re having a meaningful impact on their drinking behavior and on their mood as well.’

Sunnybrook is currently the only center in the world to actively perform deep brain simulation on patients with ‘treatment-resistant alcohol-use disorder.’

Deep brain simulations are widely used to treat a Parkinson’s disease and depression, while currently being tested for  eating disorders, obsessive compulsive disorders and Alzheimer’s.

Dr Plummer now lives in Toronto and says he’s, ‘I’m happier than I’ve been in many, many years.’

He told CTV News that he chose to come forward with his story to fight the stigma surrounding  alcohol-use disorder and addiction.

He said: ‘[Alcohol addiction] will ultimately kill you if you don’t deal with it. It just about killed me.’

WHAT IS DEEP BRAIN STIMULATION?

These are connected to extensions under the skin behind the ear and down the neck, which then connect to a pulse generator.

When the device is turned on, electrodes deliver high-frequency stimulation to the targeted area.

It is used to treat shakes in Parkinson’s patients by zapping the thalamus, a small area at the base of the organ which causes the jerky movements.

But it is being trialled in people with addiction, who are thought to have imbalances in their nucleus accumbens.

The area of the brain controls our reward system and impulsive behaviour.