NONTHABURI, Thailand (AP) – Thailand on Monday opened its first two full-time clinics dispensing cannabis oil for medical treatment, a step forward in the government’s policy of promoting the licensed use of marijuana products to relieve the symptoms of a range of ailments.

About 400 patients, many of them with cancer, were given the oil for free at a flagship clinic at the Public Health Ministry in a suburb of Bangkok.

The initial four formulations handed out are used for treating conditions such as migraines, insomnia, nausea, numbness and pain. The medicines are touted as being based on traditional remedies.

Thailand was previously known for harsh anti-drug laws, but is now eyeing the economic potential of cannabis. A report last year by Prohibition Partners, which claims to be the leading authority on the subject, said Asia’s medical cannabis market would be worth around $5.8 billion by 2024.

Around 25 similar clinics have been operating part-time since the legislature agreed in 2018 to amend the country’s drug laws to allow the use and production of medical cannabis.

The Health Ministry clinic and another in Bangkok are forerunners of a planned nationwide network, if they show positive results. 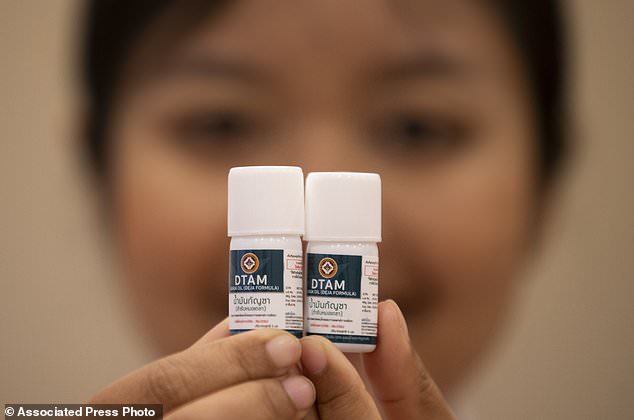 A doctor show containers of cannabis oil at the first full-time clinic prescribing cannabis oil for medical treatment in the Public Health Ministry in Nonthaburi province, Thailand, Monday, Jan. 6, 2020. The opening of the clinic is another step forward in the government’s policy of promoting the licensed medical use of marijuana products to relieve the symptoms of a range of conditions. (AP Photo/Sakchai Lalit)

“Marijuana could be an answer. At least the patients’ quality of life is improved,” said Dr. Prasert Mongkolsiri, the director of a public hospital, who helped advise patients on Monday.

“At least it can lessen the side effects of the modern chemical-based medicines that they’ve been taking for 10 or 20 years,” he said, referring to chemotherapy for cancer patients.

Chamroen Nakurai, 57, was diagnosed with lymph node cancer two years ago. She said cannabis oil helps lessen the side effects of her chemotherapy, but until now she had been able to get it only through illegal underground suppliers.

“The treatment isn’t widely available and the cost is quite high if you visit underground clinics, but this service is free and anyone can access it,” she said.

Nuthjutha Ulpathorn, 29, was born with cerebral palsy that makes her unable to walk and garbles her speech. She began to use cannabis oil two months ago after her mother brought her to a government hospital that started to give out cannabis oil.

“I sleep better, and (am) less cranky,” Nuthjutha said with a smile.

Health Minister Anutin Charnvirakul, the chief architect of the new policy drive, toured the suburban clinic on Monday. He expressed hope that the remedies might be soon added into the National List of Essential Medicine, which allows them to be covered by Thailand’s 30-baht ($1) universal health care scheme. Officials say the policy of free cannabis is likely to be changed.

Anutin is the leader of the Bhumjai Thai Party, a partner in the country’s coalition government. The party won 50 seats in March’s general election after Anutin campaigned for legalization of the production of marijuana to aid farmers. Moves to allow small-scale private production are moving ahead. 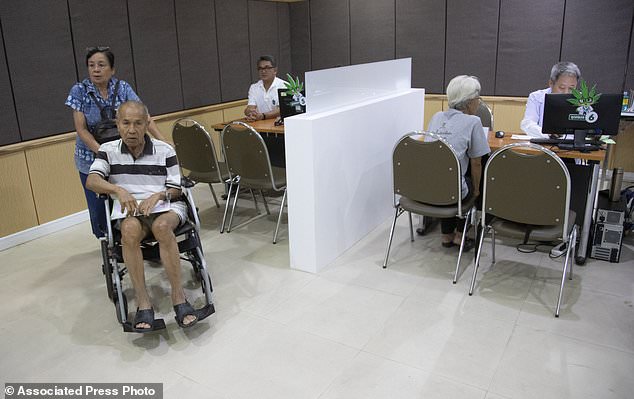 A patient leaves after a consultation at the first full-time clinics prescribing cannabis oil for medical treatment in the Public Health Ministry in Nonthaburi province, Thailand, Monday, Jan. 6, 2020. The opening of the clinic is another step forward in the government’s policy of promoting the licensed medical use of marijuana products to relieve the symptoms of a range of conditions. (AP Photo/Sakchai Lalit)