Scientists have managed to cure cancer – and stop it returning – in mice using tiny metallic particles made of copper.

In an experiment, a group of lab mice who had been given cancer were injected with specially created copper oxide particles.

Copper oxide is derived from copper and oxygen, and the researchers made it into nanoparticles – hundreds of times thinner than human hair.

They injected this into tumours at the same time as giving the mice immunotherapy, a powerful treatment already used by doctors.

The cancers disappeared and, when cancerous cells were injected into the animals’ bodies again, the immune system destroyed them straight away.

Human trials are the next step for the scientists, who hope the treatment could replace gruelling chemotherapy for as many as 60 per cent of cancers. 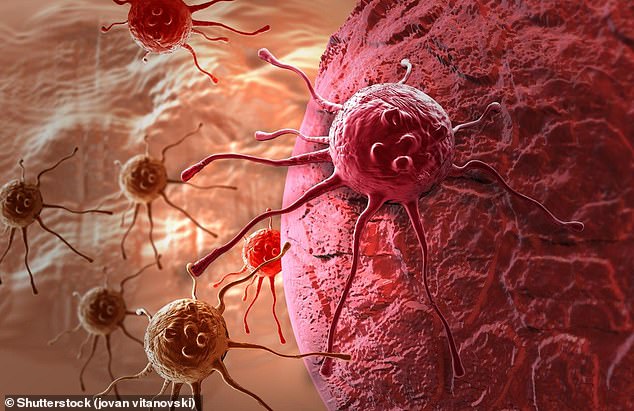 ‘If we would ingest metal oxides in large quantities, they can be dangerous,’ said Professor Stefaan Soenen and Dr Bella Manshian, from KU Leuven university in Germany, who worked together on the study.

‘But at a nanoscale and at controlled, safe, concentrations, they can actually be beneficial.’

Professor Soenen added: ‘As far as I’m aware, this is the first time that metal oxides are used to efficiently fight cancer cells with long-lasting immune effects in live models.

‘As a next step, we want to create other metal nanoparticles, and identify which particles affect which types of cancer.’

The mice in the study were given lung and bowel cancers, and the scientists suggested copper oxide could work for breast and ovarian forms of the disease, among others.

Metals are known to be poisonous to living cells and cause physical damage to them as well as disrupting DNA and stopping them reproducing normally.

This is one of the reasons why air pollution is so harmful, and also why exposure to lead, for example, can cause serious illnesses.

By harnessing tiny amounts of this danger and targeting it directly at cancer tumours, researchers were able to destroy specific growths.

And they combined the treatment with immunotherapy, which is a medical way of unleashing the body’s own immune system and white blood cells’ ability to destroy a tumour.

The body is capable of breaking down cancers by itself but may be held back to stop itself overreacting and damaging healthy tissue.

Immunotherapy is becoming increasingly common because it means patients can be treated without chemotherapy, which often has crippling side effects.

People taking chemo may lose their hair, become extremely weak and frail, lose weight, vomit, and may be so sickened they cannot tolerate it at all, allowing the cancer to grow.

Professor Soenen added: ‘Nanomedicine is on the rise in the US and Asia, but Europe is lagging behind.

‘It’s a challenge to advance in this field, because doctors and engineers often speak a different language.

‘We need more interdisciplinary collaboration, so that we can understand each other better and build upon each other’s knowledge.’

It works by harnessing the immune system recognise and attack cancer cells. It is normally given via an IV drip.

Some types of immunotherapy are also called targeted treatments or biological therapies.

One might have immunotherapy on its own or with other cancer treatments.

The immune system works to protect the body against infection, illness and disease. It can also protect from the development of cancer.

Normally, it can spot and destroy faulty cells in the body, stopping cancer developing. But a cancer might develop when:

Cancer treatments do not always fit easily into a certain type of treatment.

For example, a type of immunotherapy called checkpoint inhibitors are also described as a monoclonal antibody or targeted treatment.

This treatment changes the genes in a person’s white blood cells (T cells) to help them recognise and kill cancer cells.

It is available as a possible treatment for some children with leukaemia and some adults with lymphoma.

People with other types of cancer might have it as part of a clinical trial.

MABs recognise and attach to specific proteins on the surface of cancer cells.

Antibodies are found naturally in our blood and help us to fight infection. MAB therapies mimic natural antibodies, but are made in a laboratory.

Monoclonal means all one type. So each MAB therapy is a lot of copies of one type of antibody.

MABs work as an immunotherapy in different ways. They might do one of the following:

MABs trigger the immune system by attaching themselves to proteins on cancer cells.

This makes it easier for the cells of the immune system to find and attack the cancer cells.

Cancer can sometimes push a stop button on the immune cells, so the immune system won’t attack them.

Interferon and interleukin are types of cytokines found in the body. Scientists have developed man made versions of these to treat some types of cancer.