A saliva test that diagnoses mouth and throat cancer caused by HPV could save thousands of lives each year, a study suggests.

Scientists at Duke University in North Carolina discovered the test was 80 per cent accurate at spotting the killer diseases.

Doctors say it is able to detect the cancers early on, giving patients much higher hopes of surviving their battle.

Before it can be used in hospitals around the world, further trials will be needed to confirm the technology works.

But the researchers are hopeful, claiming the cheaper test – which gives results in as little as 10 minutes – has significant ‘potential’. 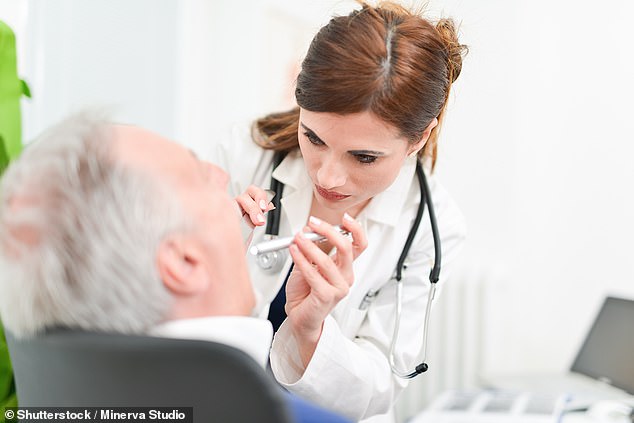 Mouth and throat cancer are often not diagnosed until they become advanced, partly because their location makes them difficult to see during routine clinical exams (stock)

Rates of oral cancers are soaring in the Western world, with the number of patients diagnosed in the UK having doubled in a generation.

US doctors have also seen a similar spike in the diseases, which can be caused by human papilloma virus (HPV).

Other risk factors include drinking excessive amounts of alcohol over long periods of time and smoking cigarettes.

Professor Tony Jun Huang, study co-author, said there are around 115,000 cases of oropharyngeal cancers each year across the world.

He said it is ‘one of the fastest-rising cancers in Western countries due to increasing HPV-related incidence, especially in younger patients’.

Orophayngeal cancer starts in the oropharynx, the back of the throat which includes the base of the tongue and tonsils.

It sits under the branch of head and neck cancers, which also includes mouth cancer – another type that can be caused by HPV.

Detecting the disease early can boost survival odds from 50 per cent to 90 per cent, according to the NHS.

But patients are often not diagnosed until they become advanced, partly because their location makes them difficult to see during routine clinical exams.

The new test uses a chip developed to isolate tiny micro-particles, known as exosomes, in saliva.

These particles are secreted into body fluids and several types of cancers are known to multiply their numbers.

Exosomes are responsible for transferring molecules between cancer and various cells.

The new test isolates them by filtering out larger particles in the saliva and probing the exosomes for DNA shed by tumours.

It also scans fluid in the mouth for HPV-16, one strain of the STI that can put people at risk of oropharyngeal cancer.

The test takes five minutes to conduct and a further five to process the results. Experts also said it is cheap – but did not elaborate on the cost.

In comparison, current biopsies take around eight hours because they need to be sent away to be assessed by a surgeon.

Professor Huang said: ‘It is paramount that surveillance methods are developed to improve early detection and outcomes.’

He added the successful detection of HPV from saliva ‘offers advantages including early detection, risk assessment, and screening’.

Orophayngeal cancer killed 2,722 Britons last year and took the lives of 9,750 people in the US, figures show.

According to the researchers, this technology can also be used to analyse blood, urine, and plasma.

The findings were published in the Journal of Molecular Diagnostics.

The Oral Health Foundation last month urged people to wise up to the causes of the ‘devastating’ disease, mainly HPV and alcohol.

Dr Nigel Carter OBE, chief executive of the OHF, said: ‘While most cancers are on the decrease, cases of mouth cancer continue to rise at an alarming rate.

‘We have seen first-hand the devastating affect mouth cancer can have on a person’s life.’

WHAT IS MOUTH CANCER?

Mouth cancer, also known as oral cancer, is where a tumour develops in the lining of the mouth.

It may be on the surface of the tongue, the insides of the cheeks, the roof of the mouth (palate), or the lips or gums.

Tumours can also develop in the glands that produce saliva, the tonsils at the back of the mouth, and the part of the throat connecting your mouth to your windpipe (pharynx). However, these are less common.

Symptoms of mouth cancer include:

See your GP or dentist if these symptoms don’t heal within three weeks, particularly if you drink or smoke heavily.