Diabetics may no longer need to use finger-prick tests to check their blood sugar – instead they could rely on a wearable heart monitor.

Researchers found the AI-based sensor can detect low levels of blood sugar, known as hypoglycaemia, by looking at a patient’s heart rate.

Low blood sugar – which can be dangerous if not treated promptly – can increase heart rate and blood pressure, as well as cause heart palpitations and affect the organ’s electrical activity.

Scientists used electrocardiogram data from patients to train a computer system to recognise normal readings, as well as when their sugar levels dropped.

University of Warwick, who tested the gadget on eight patients, claim the monitor was successful and could ‘replace’ finger-prick testing.

Hypoglycaemia can affect both type 1 and type 2 diabetes patients. Left untreated, it can lead to a coma and seizures.

For years diabetics have had to test their blood sugar, usually using a pin-prick blood test on their finger, and inject insulin if their sugar is too high. 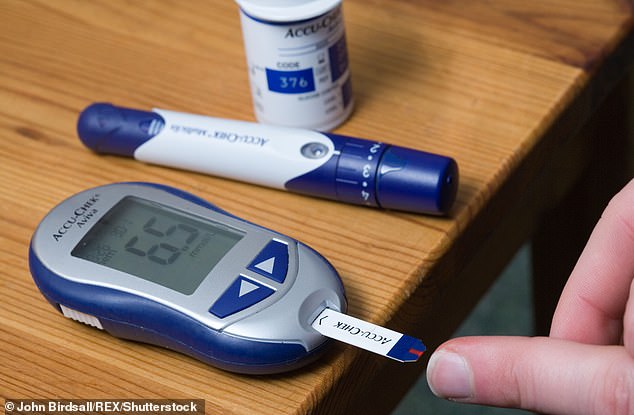 Wearable monitors, such at the Freestyle Libre system used by Theresa May, do not measure blood sugar levels.

Instead they measure the amount of sugar in fluid under the skin, which is known as interstitial fluid.

Whilst the Freestyle Libre system is intended to replace self-monitoring of glucose levels, because interstitial readings are a few minutes behind blood sugar readings, finger-prick tests are still necessary when glucose levels are changing rapidly.

A finger-prick test may also need to be done if the system reports hypoglycaemia or impending hypoglycaemia, or when a sufferer’s symptoms do not match their monitor’s readings.

As a result, the new research involving wearable heart monitors could make the lives of sufferers easier.

There are thought to be more than four million patients in the UK with diabetes, as well as 23million in the US.

The University of Warwick researchers examined how ECG readings changed during a hypoglycaemic event, when blood sugar levels fall below four millimoles per litre.

They then used the artificial intelligence system to recognise low levels compared to normal readings.

The researchers added that the use of the algorithm had overcome previous failed attempts to use ECGs to detect hypoglycaemia.

None of those taking part were diabetic but the researchers said the principle still applied.

Although the study, published in the journal Scientific Reports, was a pilot and will require larger trials, the concept has been proven to work.

The researchers said: ‘The technology works with an 82 per cent reliability, and could replace the need for invasive finger-prick testing with a needle, which could be particularly useful for paediatric age patients.’

‘This is relevant because ECG can be detected in any circumstance, including sleeping.’

‘Our approach enabled personalised tuning of detection algorithms, and clinicians can adapt the therapy to each individual.

‘Clearly more clinical research is required to confirm these results in wider populations.’

WHY IS IT IMPORTANT FOR DIABETES PATIENTS TO MEASURE THEIR GLUCOSE LEVELS?

Diabetes is a serious life-long condition that occurs when the amount of sugar in the blood is too high because the body can’t use it properly.

Patients have to regular monitor their glucose levels to prevent them from developing any potentially fatal complications.

Blood glucose levels should be between the ranges of 3.5–5.5mmol/L before meals and less than 8mmol/L, two hours after meals.

Hypoglycemia (when blood sugar drops below 4 mmol/L) can occasionally lead to patients falling into comas in severe cases.

However, it most often can be treated through eating or drinking 15-20g of fast acting carbohydrate, such 200ml of Lucozade Energy Original.

Sufferers can tell they are experiencing a hypo when they suddenly feel tired, have difficulty concentrating or feel dizzy.

Type 1 diabetes patients are more likely to experience a hypo, because of the medications they take, including insulin.

Hyperglycemia (when blood sugar is above 11.0 mmol/L two hours after a meal) can also have life-threatening complications.

It happens when the body either has too little insulin, seen in type 1, or it can’t use its supply properly, most often in type 2.

In the short-term, it can lead to conditions including ketoacidosis – which causes ketones to be released into the body.

If left untreated, hyperglycemia can lead to long-term complications, such as impotence and amputations of limbs.