Just a few hours of exposure to air pollution could increase your risk of a heart attack, a new study warns.

Researchers say that being exposed to high levels of particles mostly made from car emissions can drive up by at least 10 percent.

While heart disease deaths have been decreasing, the number of heart attacks have been rising in several countries, including the US.

Although known risk factors include a poor diet and a lack of exercise, the team, led by Yale University, says rising levels of air pollution and tiny particles that can penetrate deep into the bloodstream are also to blame. 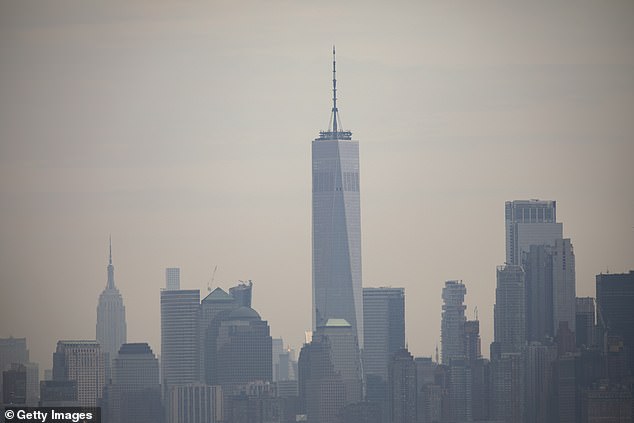 A new study, led by Yale University, found that every time the number of ultrafine particles in the air increased, the risk of a non-fatal heart attack six hours late rose by 3.27 %. Pictured: A layer of smog above New York City, May 2019

For the study, published in the journal Environmental Health Perspectives, the team analyzed data from a registry of all nonfatal heart attacks in Augsburg, Germany.

The cases were then compared against pollution from ultrafine air particles (UFP), which mostly comes from car exhaust systems, during the hour of the heart attack.

Because they are so small – narrower than a human hair – these particles stay in the air longer than heavy particles, increasing the risk of us inhaling them.

The tiny bits of matter can reach the deep recesses of the lungs, lodge themselves there, and potentially enter the circulatory system and bloodstream.

Studies have shown that exposure to fine particles can increase the risk of lung disease and heart disease as well as worsen chronic conditions including asthma and bronchitis.

Currently, the World Health Organization, estimates that, worldwide, seven million people die every year from exposure to such pollution with most deaths occurring in low- and middle-income countries, chiefly in Africa and Asia.

Researchers found that every time the number of ultrafine particles in the air increased, the risk of a non-fatal heart attack six hours later rose by 3.27 percent.

They found this risk increased to 10 percent.

‘This study confirms something that has long been suspected – air pollution’s tiny particles can play a role in serious heart disease,’ said first author Dr Kai Chen, an assistant professor at Yale School of Public Health.

‘This is particularly true within the first few hours of exposure. Elevated levels of UFP are a serious public health concern.’

For future research, the team plans to look at the risk to vulnerable populations such as those with pre-existing conditions or who are taking medication.

The findings add to a growing body of evidence on the adverse effects of tiny particles from air pollution on human health.

In August 2018, a study from the University of Texas at Austin found that air pollution was shaving years off of the global life expectancy from an average of four months in the US and UK to two years in Egypt.

And in October 2018, another study found that living in smog-filled cities could raise the risk of mouth cancer by up to 40 percent.

It’s raining CANNABIS! Residents of Tel Aviv scramble to gather up drugs after legalisation campaigners use drones to drop hundreds of baggies on to the streets