Gene-editing therapy for cancer has moved one step closer as scientists engineer patients’ blood cells to recognise and destroy tumours.

After being trialled on three older patients, it has been shown gene-edited white blood ‘T-cells’ are safe.

They can stay in the body for up to nine months, and remain capable of killing cancer cells.

More research is needed on larger groups of people to work out if super-charged white blood cells can help cure people with cancer.

But the breakthrough means fears that gene-editing would fall at the first hurdle – being unsafe to use in cancer patients because their immune system would reject it – appear to be unfounded. 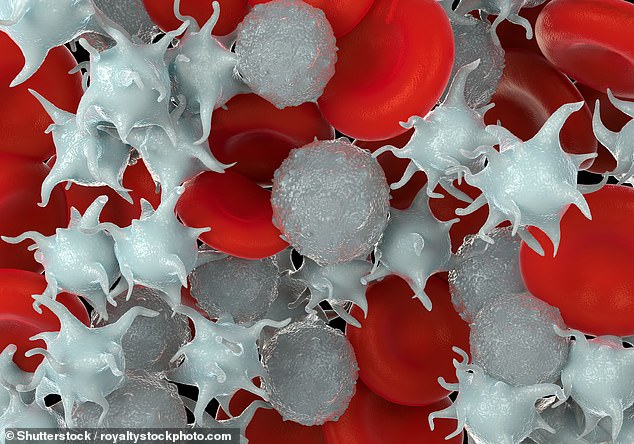 Gene-editing therapy for cancer has moved one step closer as scientists engineer patients’ white blood cells to recognise and destroy tumours (pictured, illustration of white blood cells, which are red, and leukaemia cells)

Gene-editing is the next great hope in the ongoing race to find a cure for cancer, which affects one person every two minutes in the UK, or 363,000 a year.

We already have immunotherapy, which takes the T-cells that fight disease out of the body, and helps them recognise tumours.

But gene-editing can potentially improve on this, by removing genes which stop T-cells working at full power.

It is hoped this could one day be used to help people’s immune systems cure genetic diseases too, ending the misery of conditions like cystic fibrosis and sickle-cell anaemia.

The researchers who have proved gene-edited cells can safely be used in cancer patients are the first to attempt three ‘edits’ to the genes of their white blood cells.

Dr Carl June, who led the study from the University of Pennsylvania, said: ‘Our data from the first three patients enrolled in this clinical trial demonstrate two important things that, to our knowledge, no one has ever shown before.

‘First, we can successfully perform multiple edits with precision during manufacturing, with the resulting cells surviving longer in the human body than any previously published data have shown.

‘Second, thus far, these cells have shown a sustained ability to attack and kill tumours.’

The gene-editing, using a tool called CRISPR-Cas 9, which uses ‘molecular scissors’ to cut away DNA from people’s cells, was trialled on two patients with the bone marrow cancer myeloma and one with a sarcoma – a cancer of the tissue which connects bone – in their lower leg.

The patients, in their sixties, had blood taken so that the T-cells could be engineered to recognise cancer cells.

These T-cells then had three genes deleted – one to remove a protein which hinders their ability to kill cancer cells.

Next the edits were to remove the ‘keys’ on their surface which latch on to ‘keyholes’ on diseased cells, but don’t really work for tumour cells.

The keys were replaced with engineered ones which better fit the ‘keyholes’ of the types of tumours the patients had, and then their T-cells were put back into their body using a drip.

The big concern was that gene-edited cells would be rejected by the patients’ immune system, because the tool used to snip out their genes contains DNA from foreign bacteria.

But this was not the case, and the harmful side effects which had given observers of the trial nightmares, did not happen in the patients.

When researchers took blood from the patients up to nine months later, the super-charged T-cells were still there. More importantly, they were found to destroy cancer cells in the lab, according to the study from the journal Science.

Gene-editing differs from the immunotherapy CAR-T, which also engineers T-cells but does so by adding DNA to help them recognise cancer cells, using a virus.

Commenting on the research, Dr Astero Klampatsa, from the Institute of Cancer Research, London, said: ‘The new clinical study suggests that CRISPR-Cas9 can successfully be used to optimise cellular immunotherapies to treat solid tumours – but the therapy will need to be tested in more patients to better understand the side-effects and the benefit of the engineered T-cells over time.’

HOW DOES CRISPR DNA EDITING WORK?
The CRISPR gene editing technique is being used an increasing amount in health research because it can change the building blocks of the body.

At a basic level, CRISPR works as a DNA cutting-and-pasting operation.

Technically called CRISPR-Cas9, the process involves sending new strands of DNA and enzymes into organisms to edit their genes.

In humans, genes act as blueprints for many processes and characteristics in the body – they dictate everything from the colour of your eyes and hair to whether or not you have cancer.

The components of CRISPR-Cas9 – the DNA sequence and the enzymes needed to implant it – are often sent into the body on the back of a harmless virus so scientists can control where they go.

Cas9 enzymes can then cut strands of DNA, effectively turning off a gene, or remove sections of DNA to be replaced with the CRISPRs, which are new sections sent in to change the gene and have an effect they have been pre-programmed to produce.

But the process is controversial because it could be used to change babies in the womb – initially to treat diseases – but could lead to a rise in ‘designer babies’ as doctors offer ways to change embryos’ DNA.

Teen are LESS likely to use marijuana in states with recreational use laws, study finds