A protein from the virus, which causes mouth blisters in animals such as cows, sheep and pigs, was developed into a drug.

It was able to completely rid mice of pancreatic cancer tumours, scientists at Queen Mary University of London said, and even extend their lives.

They hope that the results of the study could pave the way for new treatments for pancreatic cancer, which has been lagging. 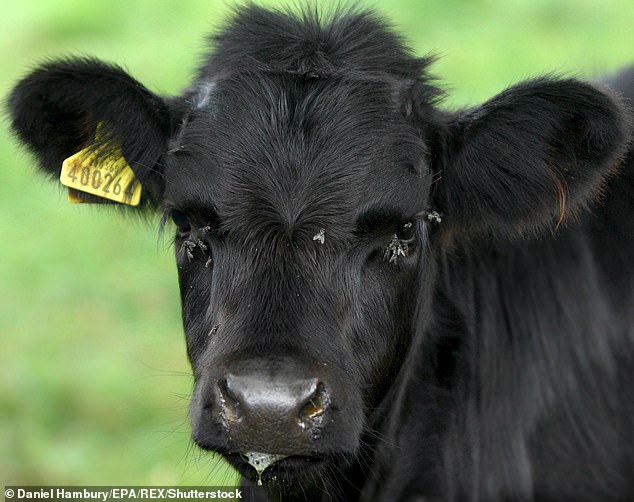 Pancreatic cancer is the 11th most common cancer in the UK, according to Cancer Research UK. It causes around 9,200 deaths every year.

It strikes about 57,600 people in the US every year, and kills around 47,050, according to the American Cancer Society.

Only one per cent of people diagnosed with the disease are expected to survive for 10 years or more because people are often diagnosed late, and treatment options are limited.

The five-year survival rate has remained at less than five per cent for decades because no effective therapies have been identified.

Commenting on the research, Dr Emily Farthing, senior research information manager at Cancer Research UK, said: ‘This early-stage research has developed a promising new drug that reduces the growth of pancreatic tumours in the lab.

‘And with further research to see if it’s safe and effective for patients, we hope that this could one day offer new hope for people with this disease.’

In its early stages, pancreatic cancer rarely causes symptoms. When stomach pain, yellow skin and eyes, and weight loss do appear, it may be too late.

If the tumour is large or has spread, treating or curing the cancer is much harder. Surgery – the only way of curing the disease – is no longer possible in most cases.

A virus that causes fever and blisters in cattle could hold the key to tackling the deadly disease.

Foot-and-mouth, not to be confused with hand, food and mouth disease which can affect humans, can be fatal to animals.

Its destroyed farmer’s livestock numbers after first being discovered in Essex – and rapidly spreading across the UK – in 2001.

The protein targets another protein, called ΑvΒ6 (alpha-v-beta-6). This protein is found at high levels on the surface of the majority of pancreatic cancer cells.

When mice with pancreatic cancer tumours were treated with the protein-drug combination twice a week for up to five weeks, the tumours were completely killed.

The rodents that had ΑvΒ6-positive tumours were given a tiny dose of the protein-drug combination, which stopped the tumours growing completely.

But when the dose was increased and given twice a week, the researchers found all the tumours in mice were completely killed.

Four or five of the eight mice were ‘cured’ with the most potent and effective drug developed, the authors wrote.

Professor Marshall said: ‘Foot-and-mouth disease virus uses ΑvΒ6 as a route to infect cattle, as the virus binds to this protein on a cow’s tongue.

‘By testing pieces of the protein in the virus that attaches to ΑvΒ6, we’ve developed a route to deliver a drug specifically to pancreatic cancers.’

The team also used the protein-drug combination on human cancer cells in the lab.

Some of these cells had ΑvΒ6 on their surface while others did not.

The researchers found that cells with ΑvΒ6 responded well to the treatment, while the ΑvΒ6 negative cells needed much higher doses of the drug for the cells to be killed.

Their findings were published in the journal Theranostics.

It causes a fever lasting two to six days and blisters in the mouth and on the feet.

FMD is a worldwide concern, as it can spread quickly and cause significant economic losses.

The virus has had disastrous consequences for UK farming in the past. In 2001, the agricultural industry was plunged into crisis when farmers had to cull their livestock in swathes to curb an outbreak.

There are seven known types and more than 60 subtypes of the FMD virus.

It is often confused with hand, foot and mouth disease (HFMD), which can affect humans.

This viral infection causes lesions to form on a sufferer’s hands, feet and mouth. It can also affect the buttocks and genitals.

It is most common in children under 10, with outbreaks occurring at nurseries and schools.

Putting exercise bikes in offices and getting employees to use them for just nine minutes twice a week could slash their risk of heart disease, study claims