A major study found almost half of people who developed bladder cancer could be spotted a decade in advance by using the urine test.

Detection of bladder cancer is usually very poor – with a quarter of cases in England diagnosed at a late stage of the disease.

This slashes people’s survival rates – if the cancer is spotted at the earliest stage there is a 90 per cent chance of surviving five years, but if it is spotted late on survival falls to 10 per cent.

The only way to diagnose the disease at the moment is an invasive cystoscopy – an unpleasant procedure in which a camera is sent into the bladder. And this is only done if someone complains of symptoms.

In time, the urine test could even lead to national screening programmes for all people at a certain age, the researchers said. 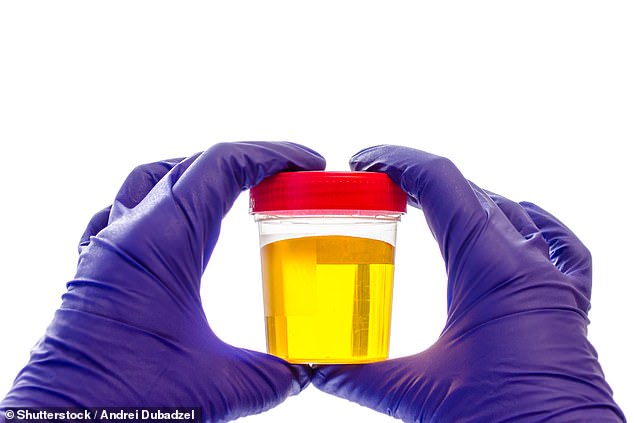 The new study, published in the Lancet EBioMedicine journal, was led by the World Health Organisation.

It involved 131 people in Iran, aged between 40 and 75 years, 30 of whom developed bladder cancer after a decade.

Fourteen of the 30 (46 per cent) who developed bladder cancer could be spotted 10 years in advance by using the urine test.

And tests conducted later on picked up a greater proportion – with 57 per cent picked up seven years in advance.

If urine samples were analysed 18 months before the cancer was diagnosed, 83 per cent of cases were picked up by the test.

A cystoscopy would probably still be needed to confirm the results – but such a simple way of picking out people at risk would mean many more people are tested.

The test looks for gene mutations called TERT in the DNA from urine. These mutations are frequently found in bladder cancer tumours.

The academics, from the WHO International Agency for Research on Cancer in France as well as the University of Cambridge and several other universities, said the mutations offer a valuable opportunity for screening.

More than 10,000 people in the UK are diagnosed with bladder cancer each year – and 5,400 people are killed by the disease annually.

Dr Florence Le Calvez-Kelm, the IARC scientist who is the principal investigator of the study, said: ‘These new results are another exciting step towards the validation of a non-invasive early detection tool.

‘This test could significantly improve and simplify the way in which bladder cancer is detected.’ The test – called UroMuTERT – picks up mutations to the TERT gene.

Dr Md Ismail Hosen, of the University of Cambridge and the IARC, said: ‘Our results provide the first evidence from a prospective population-based cohort study of the potential of urinary TERT promoter mutations as promising non-invasive biomarkers for the early detection of bladder cancer.’

The study took urine samples from a 50,000 people strong cohort. Professor Reza Malekzadeh, of Tehran University, said: ‘The [study] is one of the few prospective population-based cohorts that provide the opportunity to assess urinary biomarkers for the pre-clinical detection of bladder cancer.’

The team is now conducting larger studies to confirm the findings.

Dr Mahdi Sheikh, a scientist at IARC, added: ‘If the findings are validated, large trials conducted in individuals at high risk of developing bladder cancer should be designed to address the health and cost benefits of screening for TERT promoter mutations for the global bladder cancer burden.’

WHAT IS BLADDER CANCER?

Bladder cancer is caused by a tumour developing in the lining of the bladder or the organ’s muscle.

It is the 10th most common cancer in the UK – but a little more prevalent in the US – and accounts for about three per cent of all cases.

The cancer is more common in men and has a 10-year survival rate of about 50 per cent. Around half of cases are considered preventable.

Symptoms of the disease include blood in the urine, needing to urinate more often or more urgently than normal and pelvic pain.

However, unexpected weight loss and swelling of the legs can also be signs of the killer disease.

Smoking and exposure to chemicals in plastics and paints at work can increase the risk of getting bladder cancer.

Treatment varies depending on how advanced the cancer is, and may include surgery, radiotherapy or chemotherapy.

Will COVID-19 lead to cannabis legalisation in the UK?