Snake venom can kill breast and colon cancer tumours really quickly, scientists claim. But finding the correct dose is like ‘panning for gold’.

A team of biologists at the University of Northern Colorado are testing the toxic venom of hundreds of snake in the search for a cancer cure.

They say it has potential to be therapeutic against human diseases after conducting preliminary research on lab-grown cancer cells.

Snake venom is highly toxic, and a singular bite can kill prey almost in an instant.

Scientists admit directing the venom to only destroy cancer cells without being fatal to humans will be a challenge. 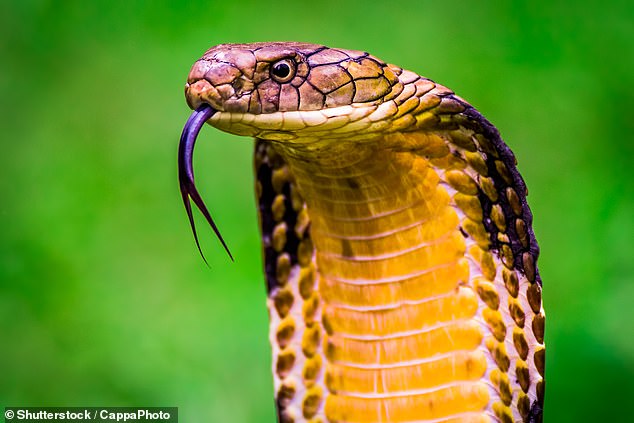 Snake venom can kill breast and colon cancers really quickly, scientists claim. But finding the correct dose is like ‘panning for gold’. Pictured, a king cobra

Cancer is one of the leading causes of death worldwide, and the discovery for new drugs is ongoing.

Snake venom, folk medicines used for centuries, has become an interest to some scientists because it contains a myriad of proteins and chemicals.

Venom from a single snake may contain hundreds of components. However, of the thousands of protein families currently known to exist in nature, only about 26 families are found in reptiles.

Captopril, a drug used for high blood pressure, was designed based on the structure of a peptide isolated from the snake venom.

It has been used in the US and UK for around 40 years, and has driven the search for more novel drugs using snake venom.

Dr Stephen Mackessy believes his lab at UNC’s School of Biology is the first to investigate snake venom as a possible target for fighting cancer.

He told CBS Denver: ‘These are compounds that have evolved to kill other animals, and kill things … in general, wreak havoc with living systems.

‘It turns out they are actually a very logical place to look for therapeutics.’

Students at UNC are given access to hundreds of snakes from around the world, from rattlesnakes to vipers, to study the compounds and proteins. New technology allows them to screen and extract components from the venom.

PhD candidate Tanner Harvey has specifically been researching viper venoms, finding each one uses a unique approach depending on its dose.

He said: ‘(One viper venom) kills breast cancer really quickly at low doses. And, it kills colon cancer at low doses. But, it doesn’t kill melanoma.’

However, other venoms aggressively attack melanoma – a common form of skin cancer.

Research is still in preliminary phases, analysing venom on cancer cells in vitro. The cells are cultured in the lab; these are typically harvested from human cancers.

The team hope to one day move forward into clinical studies with humans, but they have a lot of work to do to find the right dose.

Snake venom is poisonous to humans and can be deadly, effecting the blood, muscles and heart.

But there are certain compounds that are believed to induce cells to go into what’s known as apoptosis or ‘cellular suicide’.

The challenge is to programme the snake venom to induce apoptosis in problematic cells like cancer but not affect other healthy cells in the body.

‘(Finding the proper doses and mixes) is just like panning for gold,’ Mr Harvey said.

When asked if students at UNC were capable of finding the cure to cancers, Dr Mackessy said there is ‘no question they are contributing’.