Man’s best friend may hold the key to treating a rare form of brain cancer in humans, scientists now believe.

Researchers from Jackson Laboratories in Bar Harbor, Maine believe that an immunotherapy often used to treat dogs with glioblastoma may lead to more effective treatments for the same deadly brain cancer in humans.

Glioblastoma is an aggressive brain tumor with a five-year survival rate of just five percent, in part because they are usually inoperable.

The cancer is usually treated with chemotherapy, but often it only buys patients a limited amount of time and the tumors commonly recur, and caused the death of US Senator John McCain.

But now that scientists have discovered marked similarities between glioblastoma samples taken from dogs and from adult and child human patients.

The shared gene mutations and other traits between the animal and human samples suggest to the scientists that the treatment that has helped dogs beat the cancer could do the same for their masters. 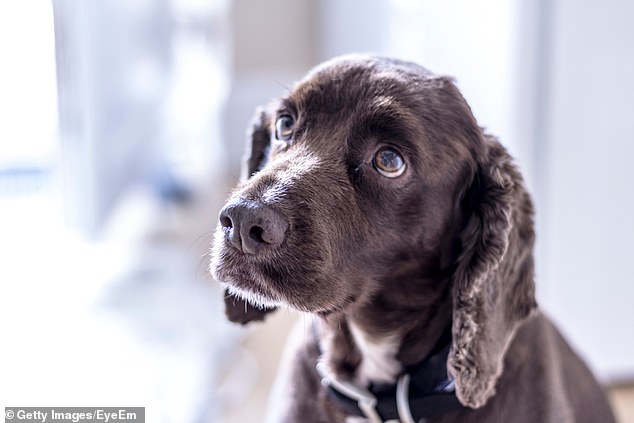 A new study from Jackson Laboratories in Bar Harbor, Maine, has found that glioblastoma samples from canine patients were similar to the same tumors found in adults and children with the cancer (file image)

Gliobastoma is a rare, aggressive type of brain tumor that is found in the brain or on the spinal cord.

The tumors form from star-shaped cells in the brain known as astrocytes and make their own blood supply, allowing them to grow quickly.

Approximately 14,000 new cases are diagnosed every year, according to the American Brain Tumor Association.

Treatment options to slow and control tumor growth include surgery (when possible), chemotherapy and radiation – but the cancer usually recurs.

The tumors are grade IV, the most deadly form, and the five-year survival rate is only five percent.

Full-grown dogs develop these aggressive brain tumors at the same rate as humans, and are just as difficult to treat.

Additionally, previous research has found that canines develop these cancers around the same age as children, which suggests that tumor development may be linked to brain age.

For the new study, published in the journal Cancer Cell, the team looked at tumor samples from 83 dogs that had passed away.

They performed a molecular examination and compared their results with the brain tumors of adult and child patients that had also died.

Researchers noticed similarities including gene mutations and fluctuations in the number of chromosomes in the dog samples and human samples.

Another finding: glioma cells in dogs were more similar to those seen in children than seen in adults, providing evidence that dogs develop the disease around the same age as children.

Results also showed that the canines’ immune responses to brain tumors were similar to the immunological responses that occur in human bodies.

The authors believe this means that using immunotherapy to treat dogs may provide ways to make if more effective in human patients.