A new Bluetooth sensor can detect heart failure 10 days before it happens with up to 80 per cent accuracy,  a study has found.

The patch, which is worn on the chest, works by tracking heart rate and rhythm, sleep quality, step count and body posture.

It pings this data to a smartphone app which uses artificial intelligence to establish a normal baseline for each patient.

From here it can detect when the heart’s function starts to deteriorate before wearers or doctors know that something is wrong.

A trial of the sensor found it accurately predicted the need for hospital treatment more than 80 per cent of the time. 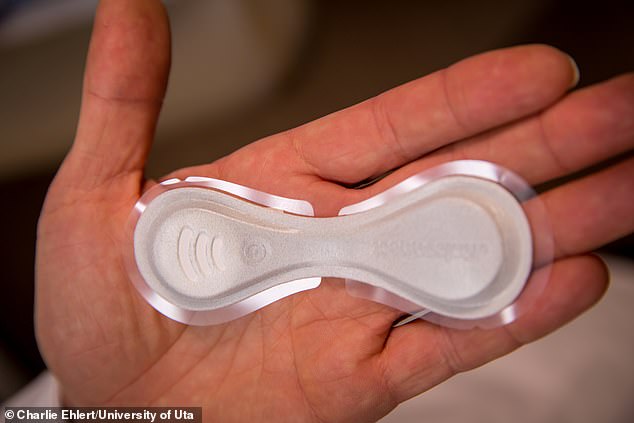 A new Bluetooth sensor that detects heart failure days before it happens can slash A&E admissions, its creators claim

On average, this prediction occurred 10.4 days before a readmission took place.

Scientists at the University of Utah Health and VA Salt Lake City Health Care System say the technology will slash the number of emergency admissions.

They followed 100 heart failure patients, with an average age of 68, who wore an adhesive sensor patch on their chests for up to three months.

An alert was activated when the information deviated from normal and indicated the patient’s heart failure was getting worse.

The system accurately predicted the impending need for hospitalisation more than 80 per cent of the time.

Lead study author Dr Josef Stehlik said: ‘This study shows that we can accurately predict the likelihood of hospitalisation for heart failure deterioration well before doctors and patients know that something is wrong.

‘Being able to readily detect changes in the heart sufficiently early will allow physicians to initiate prompt interventions that could prevent re-hospitalisation and stave off worsening heart failure.

‘There’s a high risk for readmission in the 90 days after initial discharge. If we can decrease this readmission rate through monitoring and early intervention, that’s a big advance.

‘We’re hoping even in patients who might be readmitted that their stays are shorter, and the overall quality of their lives will be better with the help of this technology.’

Heart failure means the organ is unable to function properly.  In some cases, the heart can’t fill with enough blood, in other cases, it can’t pump blood to the rest of the body with enough force.

More than 900,000 people in the UK are living with the condition, according to the British Heart Foundation. About 6.5 million adults in the US have heart failure.

‘Even if patients survive, they have poor functional capacity, poor exercise tolerance and low quality of life after hospitalisations.’

WHAT IS HEART FAILURE?

The heart is unable to pump blood around the body properly.

It usually occurs because the heart has become too weak or stiff.

Heart failure does not mean your heart has stopped working. It just needs some support to help it work better.

It can occur at any age, but is most common in older people.

Heart failure is a long-term condition that tends to get gradually worse over time.

It cannot usually be cured, but the symptoms can often be controlled for many years.

The main symptoms of heart failure are:

Some people also experience other symptoms, such as a persistent cough, a fast heart rate and dizziness.