Two existing medicines have been tested to stimulate the body’s own repair system in the hope of better treatment for injuries.

Stem cells, which build new bone, are switched on to ‘red alert’ and speed up the healing process.

Now the cocktail has proven to be safe, the team are pushing for human trials.

Not only could it create new bone, but health fractures in the hip, leg and spine, the team said. This could make a huge difference to the elderly. 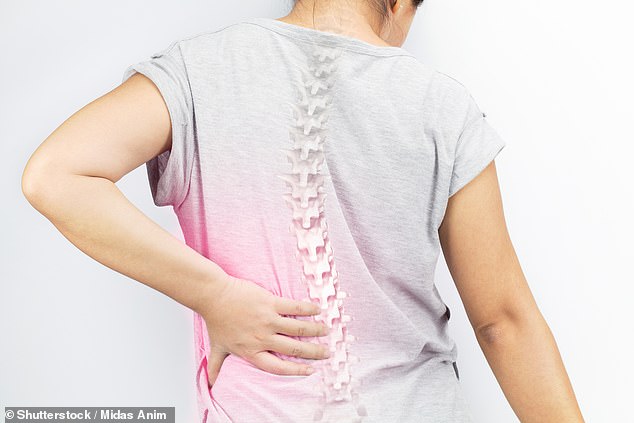 Broken spines could be regrown using a combination of readily available drugs, scientists say. Stem cells, which build new bone, are switched on to ‘red alert’

Professor Sara Rankin, corresponding author of the study from the National Heart and Lung Institute at Imperial College London, said: ‘The body repairs itself all the time.

‘We know that when bones break they will heal, and this requires the activation of stem cells in the bone. However, when the damage is severe, there are limits to what the body can do of its own accord.

‘We hope that by using these existing medications to mobilise stem cells, as we were able to do in rats in our new study, we could potentially call up extra numbers of these stem cells, in order to boost our bodies own ability to mend itself and accelerate the repair process.

‘Further down the line, our work could lead to new treatments to repair all types of bone fracture.’

It could have great potential as an efficient and cost-effective approach for a range of diseases, such as osteoporosis, which causes weakened bones that are at risk of fracturing.

Dr Redpath said: ‘Rather than devising new stem cell treatments from scratch that involve lengthy and expensive trials, our approach harnesses the power of the body’s own stem cells, using existing drugs.

‘We already know the treatments in our study are safe, it’s now just a matter of exploring further if they help our bodies heal.’

The marrow – the spongy tissue within the bone – mobilises different types of stem cells to help repair and regenerate tissue after injury or disease.

But there is a limit to how many cells are produced and what they can do. It’s not currently possible for a spine to regrow bone.

Researchers, including scientists from Beaumont Health in the US, gave the combination to lab rodents with broken spines.

Their bone volume increased after three weeks. Restoration of movement in the bone, or repair to additional tissue such as nerves, was not studied.

The drugs were found to trigger the marrow into releasing mesenchymal stem cells, a type that can turn into bone.

The rats were given a single treatment, which also aided binding of calcium to the site of bone injury, speeding bone formation.

One of the drugs used was found to spark fat cells in the marrow to release naturally occurring chemicals known as endocannabinoids that promote bone formation.

The researchers point out that other plant cannabinoids, such as cannabis, would not have the same effect, as they act on the brain rather than the bone marrow.

Reporting their findings in the journal Regenerative Medicine, they British and US teams said the drug combinations now need to be tested in humans.

It could be used to mend fractures that have resisted healing, as well as common and painful breaks for which there is currently no treatment other than relieving symptoms.

The elderly and those in late middle age may be the biggest beneficiaries, as bone loses its ability to heal with age.

But professional athletes, soldiers and others who need to recover from bone damage as quickly as possible for their career could also find it useful.

First author Dr Tariq Fellous, also from NHLI, said: ‘We first need to see if these medications release the stem cells in healthy volunteers, before we can then test them in patients with fractures.

‘We have the drugs and know they are safe to use in humans – we just need the funding for the human trials.’Tetraplegic man walks using exoskeleton controlled by brain signals.

Scientist believe lower back pain may be caused by cartilage in the spine turning into bone that looks like Swiss cheese.

Cartilage should be soft and firm, protecting the vertebrae – the 33 pieces of bone that make up the spine.

But tests on mice showed their tissue turned in to a hardened structure with holes as the rodents aged.

The porous gaps allow pain-sensing nerves to grow and spread deep into the spinal bones, in turn causing agony.

Johns Hopkins University experimented on mice genetically engineered to be at least 20 months old – the equivalent of 70-80 in humans.

They looked at layers of cartilage between each vertebrae, called endplates, which cushion the bones and protect them from the weight of the body.

The soft tissue in the mice’s spines became hardened and resembled diffuse bone. It had a Swiss cheese-like structure.

The researchers suspected that the holey structure would provide fertile ground for abnormal nerve growth.

They hope the discovery could pave the way for better treatment, with patients currently reliant on standard painkillers.

The findings were published in Nature Communications in January.

Growing your own cannabis is legalized in Italy