More people are dying early from breathing toxic air than some of the largest killers, including malaria, HIV, war and smoking.

Scientists led by Germany fear the world is facing an air pollution ‘pandemic’ after analysing deaths in every country.

Life expectancy has been cut short in East Asia, including countries such as Japan and India, by almost four years, and 2.2 years in Europe.

Long-term exposure to air pollutants was found to predominantly kill by affecting the heart and blood vessels which supply the brain.

Around two-thirds of deaths are deemed avoidable because they were attributable to human-made pollution, such as from fossil fuels. 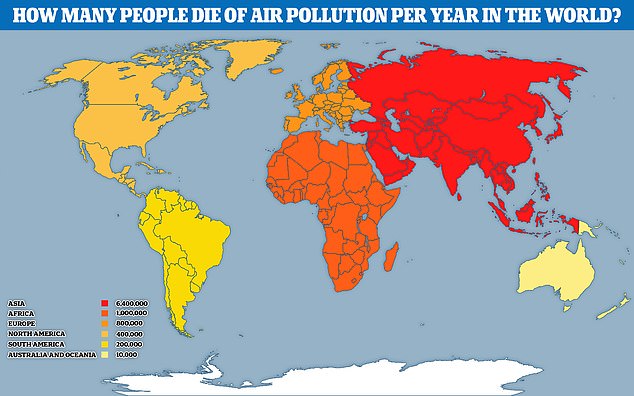 The international team of authors, led by Professor Jos Lelieveld of Max Planck Institute for Chemistry, Mainz, examined the relationship between air pollution exposure and people’s ‘loss of life expectancy’.

Computer models were able to calculate that life expectancy across the world has been reduced by 2.9 years, or two years and ten months.

By comparison, tobacco smoking shortens life expectancy by an average of 2.2 years, and HIV/Aids by 0.7 years.

Diseases like malaria that are carried by parasites or insects such as mosquitoes shortens lives by 0.6 years, and all forms of violence – including deaths in wars – by 0.3 years.

Air pollution had a greater effect on shortening lives in older people – globally, about 75 per cent of deaths attributed to air pollution occur in people aged over 60 years.

Writing in their new paper, published in the journal Cardiovascular Research, the authors said that ambient air pollution is one of the ‘main global health risks’.