Just half a teaspoon of olive oil a day could cut the risk of a heart attack by a fifth, a study has shown.

Most experts agree olive oil – especially extra virgin – is good for you. It contains a fatty acid called oleic acid which reduces inflammation. 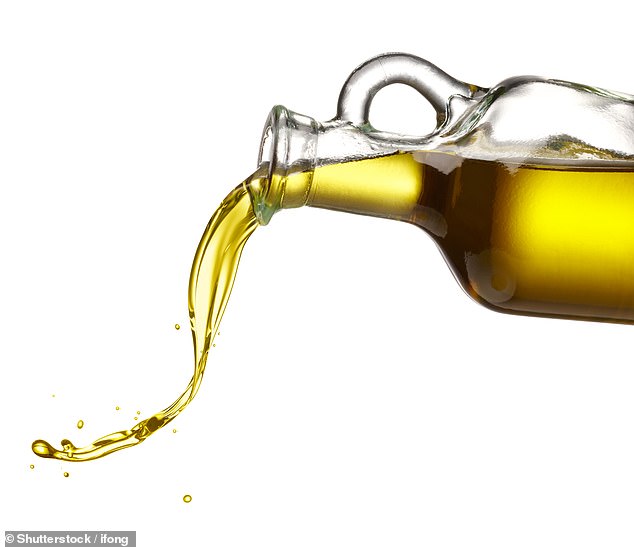 Harvard researchers studied the health of nearly 100,000 people over 24 years and found that higher olive oil consumption was beneficial to heart health

Heart and circulatory diseases cause 27 per cent of all deaths in the UK; that’s nearly 170,000 deaths each year and an average of 460 people each day, according to the British Heart Foundation.

A quarter of all deaths in the US are from heart disease yearly – 647,000 Americans.

Dr Marta Guasch-Ferre, lead author of the study, said: ‘Previous studies have linked high consumption of olive oil with better cardiovascular health, particularly in Mediterranean countries where olive oil intake is much higher than in the United States.

‘Our aim was to investigate whether higher olive oil consumption was beneficial to heart health in the US population.’

The study by Harvard T.H. Chan School of Public Health in Boston took place between 1990 and 2014.

It included 63,867 women from the Nurses’ Health Study and 35,512 men from the Health Professionals Follow-up Study.

All participants were free of cancer, heart disease and other chronic diseases at the start of the study.

Every four years for about three decades, study participants answered questionnaires about their diet and lifestyle.

Researchers also used statistical models to compare the cardiovascular health benefits of olive oil with other plant oils combined, such as corn, canola, safflower and soybean.

After accounting for diet and lifestyle factors, the researchers found that those who ate more than half a tablespoon per day of olive oil had a 15 per cent lower risk of having any kind of cardiovascular disease.

Cardiovascular disease (CVD) is a general term for conditions affecting the heart or blood vessels.

They also had a 21 per cent lower risk of coronary heart disease, a condition that occurs when the flow of oxygen-rich blood to the heart muscle is blocked or reduced.

‘One interesting thing our study shows is that although olive oil was better than most animal fats and margarine, it was not superior to vegetable oils in this study population,’ Dr Guasch-Ferre said.

‘This means that replacing any type of animal fat with vegetable oils, including olive oil but also others, could be a good strategy to improve cardiovascular health.’

The researchers also found that replacing one teaspoon of butter, margarine, mayonnaise or dairy fat with the same amount of olive oil could boost heart health.

However, when the study began in 1990, many margarines contained substantial amounts of trans-fatty acids, so the results may not apply to vegetable margarines currently available.

Higher consumption of olive oil did not show an impact on stroke risk.

They said the common cooking ingredient contains antioxidants which could help to prevent or slow down cancer growth and reduce the risk of heart attacks and strokes.

And it may reduce the damaging effects of cholesterol, blood pressure and age-related diseases, and improve cognitive function, the experts said.

The oil is high in calories – 100 per tablespoon, according to Brewer and Kellow – so it should be consumed in moderation. They also suggested one tablespoon a day.