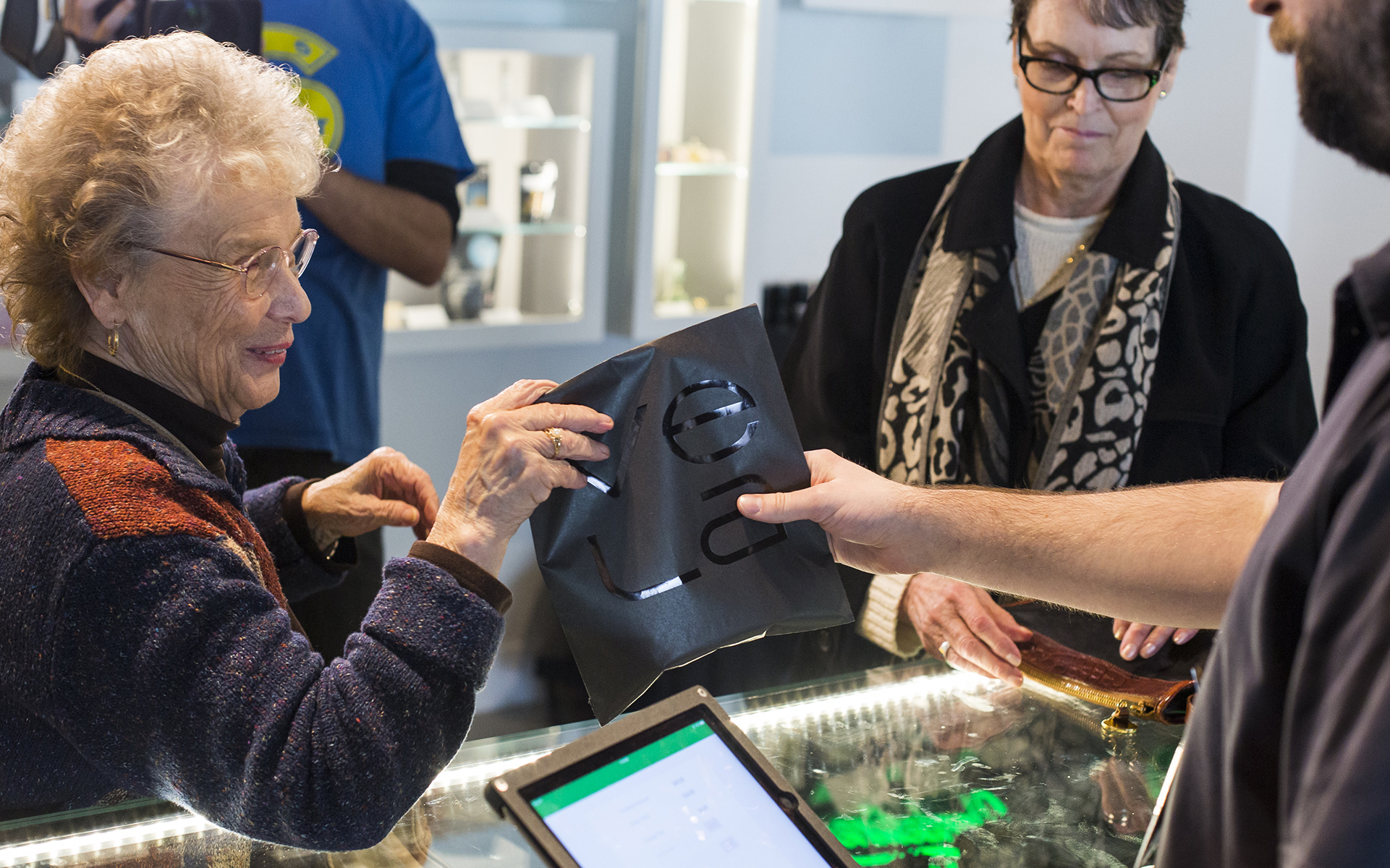 Barbara Krause makes a purchase at Vela Cannabis in Seattle, Washington. Krause was part of a group from Sound Vista Village, an assisted living facility in Gig Harbor, that visited Vela Cannabis. (Photo by David Ryder/Leafly)

If you’re used to finding home-baked cookies in grandma’s pantry, don’t be surprised if these days, you find other goodies too. Seniors have established themselves as some of the most enthusiastic cannabis consumers in the US, although their presence in the world of weed sometimes flies under the radar.

Why has cannabis gained such a strong foothold among older adults? What are senior cannabis aficionados hoping to gain from weed, and how do they fit into contemporary cannabis culture?

While commonalities still unite cannabis consumers regardless of age, emerging research is providing fresh insight into cannabis use among those in their sixties, seventies, and older.

Why weed, why now?

For many senior consumers, the motivation to try cannabis is less about the giggles and more about medicine. Recent research published in the April 2020 issue of The American Journal of Geriatric Psychiatry explores the reasons older individuals are turning to weed. The study, based on the findings of a survey completed by 568 patients at a geriatrics clinic in La Jolla, California, set out to learn more about the cannabis habits of seniors, targeted symptoms, and the perceived helpfulness of the plant.

According to Kevin Yang, first author of the study and medical student at the University of California, San Diego, the survey revealed both predictable and novel insights. “We found that 10% of older adults reported cannabis use within the past six months,” said Yang in an interview, with the vast majority turning to it for medical purposes.

“The most common reasons for cannabis use were for pain, problems sleeping, and anxiety, which is unsurprising given that these are very common symptoms experienced by older adults. We also found that 43% reported using cannabis for more than one condition,” said Yang. Among those who used cannabis to help ease anxiety, 70% found that it was extremely or somewhat helpful in soothing their worries.

Victor Guadagnino, founder of the Keystone Canna Remedies dispensaries in Pennsylvania, notes that many older adults who pass through his dispensary doors are looking for something new and fun to add to their wellness regimen.

Senior patients visit the dispensary with the hope that cannabis can alleviate an ongoing issue that regular pharmaceuticals have had little efficacy in treating. “Arthritis, neuropathy, sleep, and surprisingly, irritability, are some of the most popular conditions that we encounter,” said Guadagnino. “Many are looking to experience mood-lifting or mood-enhancing effects, along with medicinal symptom relief. We often hear the request that they would like to be happy.”

Additionally, there’s growing awareness that weed may be of assistance between the sheets. Cannabis can be a useful ingredient in promoting sensuality in older adults, helping to alleviate pain and increase relaxation and sensation. Certain brands appeal directly to senior consumers, encouraging them to reclaim and celebrate sexuality with CBD-infused lubricants and oils.

First time at the rodeo, or seasoned smokers?

Yang and his fellow researchers found that nearly three-fifths of cannabis consumers surveyed reported that they had used cannabis for the first time as older adults. “These individuals were a unique group,” explained Yang. “New users were more likely to use cannabis for medicinal purposes, use it topically as a lotion, rather than ingesting it by smoking or edibles, and inform their doctor about their cannabis use.”

While many dispensary patients are newbies, Guadagnino emphasized some are reacquainting themselves with the plant: “Most of our senior patients appear to be brand new to cannabis. However, there is a significant number that used it in the ‘60s and ‘70s, or ‘back in my day,’ as they would put it.”

According to Guadagnino, seniors who come to his dispensaries favor topicals and tinctures. Their ease of dosing and limited psychoactivity make it easier to find the “sweet spot.”

Many dispensaries strive to be inclusive spaces for the canna-curious, regardless of age. “Most seniors are surprised the first time they visit a dispensary, as it is often not at all what they expected,” remarked Guadagnino. “You’ll often see a senior patient discussing a particular product with a 20-something cannabis enthusiast. You don’t see this mix of people in any other industry, and the beauty of cannabis is that it brings everyone together.”

For travel guide Ian Ropke, 60, a desire to experiment with cannabis was ignited by curiosity. “I began to think about cannabis and using it after reading about medical marijuana over the past five years,” said Ropke. “I felt it was safe and totally acceptable in the eyes of entire nations and states. So yes, I was curious about the good vibes that cannabis could create.”

As a recovered alcoholic, Ropke was interested in pursuing a different kind of high to help him deepen his spiritual and creative practices but found that cannabis offered other benefits as well. ”Good cannabis can provide people with a special way to relax, to giggle, and have new conversations when shared with close friends and relatives,” Ropke reflected.

Cannabis culture is sometimes viewed as synonymous with youth. For Ropke, the scene is welcoming of seniors, though he recognizes that they partake in cannabis differently. “Seniors generally don’t hang out in a park or downtown smoking cannabis outside. When they’re using cannabis as a medicine, for relaxation and pain relief, then consumption is almost totally private and takes place at home,” he said.

That said, Ropke personally enjoys cannabis in social settings too. “I like to smoke cannabis together with my organic rolling tobacco, and I’ve also found that simple water pipes are great for social gatherings,” he says.

What does the future hold for seniors and cannabis?

Cannabis use among seniors looks set to continue rising. “With more states legalizing cannabis use for both medical and recreational purposes, we will likely see an increase in use of cannabis by older adults,” said Yang. He believes cannabis may become a substitute for currently prescribed medications, and could even represent a safer alternative to treatments such as opioids and benzodiazepines.

“It’s possible that cannabis, when used medicinally, may help reduce polypharmacy in older persons,” he said. In light of the survey results which indicate that seniors turn to cannabis for pain, insomnia, and anxiety, Yang expects that many consumers will report that it contributes to a higher quality of life.

Further research is needed, however, to develop a more nuanced understanding of this demographic and their unique needs. “Only then can we better understand the potential benefits and risks of cannabis and therefore be able to confidently counsel older adults on cannabis use,” reflected Yang.