There’s a push to improve access to medicinal cannabis across Australia by making it available over the counter at chemists without a prescription.

Drug regulatory bodies are trying to push through changes as the number of prescriptions being issued for medical marijuana surged by 300 per cent nation-wide in the past year.

A spokesperson for the Therapeutic Goods Association told Daily Mail Australia this could come into effect as soon as February 1, with a decision to be announced on September 9.

It comes as Australian singer and songwriter Olivia Newton-John continues lobbying efforts to change legislation as part of a pain management response for cancer patients. 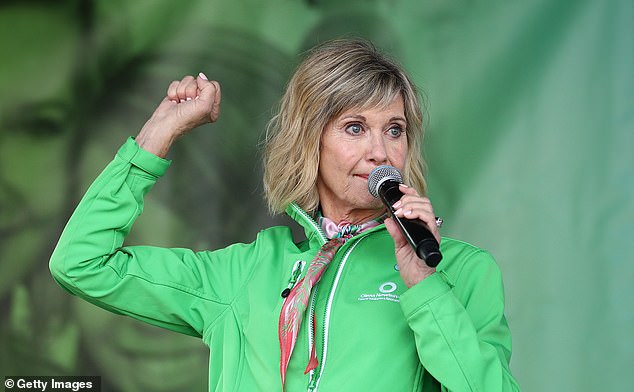 Singer and songwriter Olivia Newton- John has been championing the use of medical marijuana for some time, as part of her high profile battle breast cancer 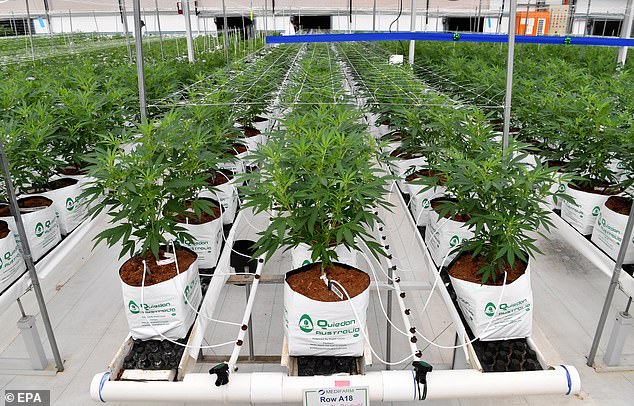 There’s a push to improve access to medicinal cannabis across Australia by making it available over the counter of chemists without a prescription (Pictured: cannabis plants at Medifarm on the Sunshine Coast in Queensland  – Australia’s first operational medical cannabis farm)

The Therapeutic Goods Administration has recommended low dose medical cannabidiol or CBD be reclassified after a senate inquiry revealed the barriers into accessing the drug.

A safety review from the TGA published earlier this month suggested down scheduling the drug to a Schedule 3 substance.

The change would mean patients would still make contact with a pharmacist, but wouldn’t require a prescription.

This would mitigate any risks by requiring a warning label on the bottle for any medicinal cannabis products according to the TGA report.

‘Whilst there are some minor signals of adverse effects such as mild drowsiness and fatigue, this could be managed as for similar S3 medicines, such as requiring a label that indicates should not use if driving or operating machinery as for other medicines that can cause potential drowsiness,’ the review suggested.

Proposed changes would mean Australians could access up to 60mg of CBD oil a day to anyone over 18.

The review found CBD appears to have ‘an acceptable safety and tolerability profile’, but raised concerns about the potential for interaction with other drugs.

The process of manufacturing CBD removes the psychoactive chemical Tetrahydrocannabinol which is the substance that leads to a high.

‘It would be terrible if patients were of the view cannabis, with no evidence to support it, was better than an established therapy for a condition,’ Dr Zappala said.

Health Minister Greg Hunt said scheduling changes are ‘a matter for the committee and the TGA in consultation with the States and Territories’.

Singer and songwriter Olivia Newton-John has been championing the use of medical marijuana for some time, as part of her high profile battle breast cancer.

The ‘Grease’ star claims the drug has been helping with her pain management and assisting her treatment for stage four breast cancer.

As part of her campaign she has launched the Cancer and Wellness Centre and has spent time campaigning to improve access.

Ms Newton John was diagnosed with her third bout of cancer in 2017, after she was successfully cured of the disease twice in 1992 and 2013.

Speaking during the Wellness Walk and Research Run in Melbourne in October, the actress told the gathered crowd: ‘I’m right here, right now, alive and healthy.’

‘I was flat on my back in the centre [the Olivia Newton-John Cancer Wellness & Research Centre] and this year, through treatment and medicinal cannabis, I am feeling fantastic.’

‘I hope to be able to soon offer that to everyone – that’s my dream.’

She even jokingly claimed in the Courier Mail she had been part of the reason for the drug’s recent legalisation in Canberra.

She added: ‘In all seriousness I hope we played some part in it. We talked to the politicians about how the public are really wanting this change.’

Medical cannabis has been available since March 2018, but only for those who get approval from a doctor through a special access scheme.

Since the changes were made 28,000 patients have applied for access and around 45,000 prescriptions have been issued.

Authorities haven’t actually approved any low dose cannibidiol product as safe for use as of yet, which is one of the requirements for a drug to be sold without a prescription.

Access to medical cannabis in UK set to improve