Half of patients given a new drug that stops cancer cells from repairing themselves saw their tumours ‘stop growing’ or ‘disappear completely’ in its first clinical trial.

Researchers from the UK conducted the study to assess the safety of the proposed medicine — berzosertib — which belong to a class of drugs called ATR inhibitors.

These work by blocking the function of a protein called ATR, which helps cancer cells fix damaged DNA.

The team said that it is unusual at such an early stage of clinical trials to see a clinical response — one which they said was ‘encouraging’. 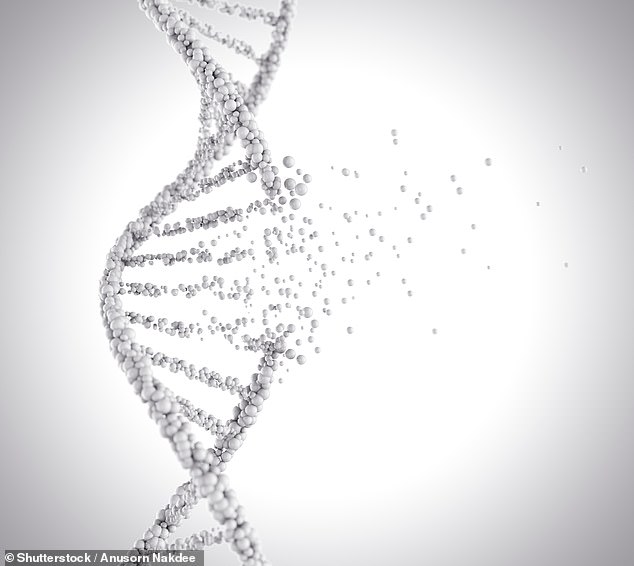 ‘Our new clinical trial is the first to test the safety of a brand new family of targeted cancer drugs in people,’ said paper author and cancer expert Johann de Bono of The Institute of Cancer Research, London.

‘It’s encouraging to see some clinical responses even in at this early stage.’

While damage to the DNA in cells is thought to be the main cause of cancer, finding ways to prevent cancer cells from being able to repair their DNA can stop the disease from spreading.

In the phase I trial, Professor de Bono and colleagues gave berzosertib — either on its own, or in tandem with chemotherapy — to 40 patients afflicted with very advanced cancerous tumours.

The team were able to establish the doses at which the drug will be safe for use in further clinical trials — alongside discovering that berzosertib on its own only causes mild side effects.

The benefits of berzosertib were the most pronounced in those patients who received chemotherapy alongside the drug, with 15 of 21 patients seeing their disease stabilise, the team reported.

Furthermore, one patient with advanced bowel cancer saw his tumours disappear completely — and was able to stay cancer free for more than two years after taking berzosertib on its own.

A second patient — a woman with advanced ovarian cancer whose disease had come back after treatment with another drug — also saw her tumours shrink after receiving berzosertib alongside chemotherapy.

Investigations in this area, he added, have ‘delivered some of the most important advances against the disease in recent years.’

‘It’s exciting to see the first clinical trial of a drug targeting a key player in the DNA repair process have such promising results, and I look forward to the results of further studies testing the benefit of this new family of targeted treatments.’

With their initial study complete, the researchers are now moving forward to further trials, with the ultimate aim of developing a new targeted treatment for patients.

The full findings of the study were published in the Journal of Clinical Oncology.