A new poll suggests New Zealanders could vote to legalise cannabis in a referendum held alongside the national election on September 19.

The poll, commissioned by proponents of the ‘Yes’ vote, has support at 48 per cent, with 43 per cent against.

The result is at odds with public polling done by Kiwi media.

A 1News Colmar Brunton poll released last week has support for change at just 40 per cent, with the ‘No’ campaign on 49 per cent support.

A new poll suggests New Zealanders could vote to legalise cannabis in a referendum held alongside the national election on September 19 (pictured: activists take part in a march calling for the legalisation of cannabis in Wellington in 2017)

Jacinda Ardern’s government agreed to hold the referendum after the 2017 election, as part of Labour’s power-sharing agreement with the Greens.

Since then, the government has worked on a model for legalising, regulating and taxing the drug, as opposed to the current prohibition regime.

The model would only allow Kiwis over 20 years of age to consume the drug at home or at cannabis cafes.

‘Despite almost 55 years of prohibition, it is New Zealand’s most widely used illicit drug,’ he said. 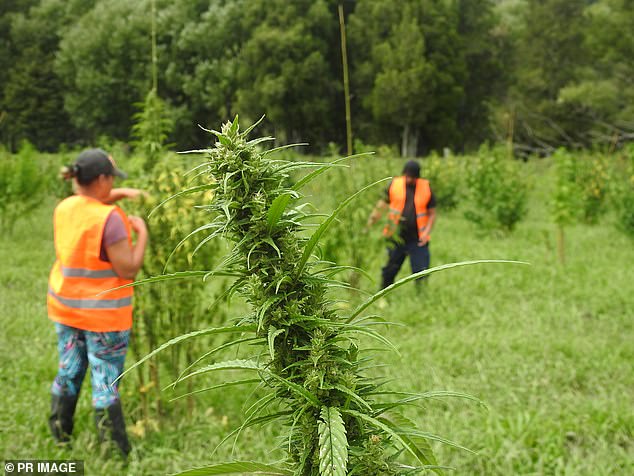 Hikurangi Cannabis, based near the small North Island town of Ruatoria in New Zealand, was granted a licence by the New Zealand government to cultivate cannabis for research

‘Evidence shows that up to 80 per cent of New Zealanders will use cannabis at least once before they turn 21.

‘We have an opportunity to vote on a solution that is focused on positive public health outcomes and harm minimisation, so let’s do it right.’

Former Prime Minister Helen Clark is a leading proponent of the ‘Yes’ vote, while the think tank in her name, the Helen Clark Foundation, has also thrown its weight behind the legalisation push.

‘The status quo isn’t fine … we need to get a grip on this market,’ she said.

‘Let’s get real here. This is a widely used recreational drug that is less harmful for individual health than tobacco and alcohol.

‘It’s a no-brainer to stop wasting our taxpayer money.’

Campaigners ‘Say Nope to Dope’ say legalisation is dangerous due to the high potency of modern-day cannabis, and believe it will lead to a jump in use and addiction rates.

Eating less, exercising more, and quitting alcohol and cigarettes could slash dementia rates by up to 40%, major study finds