Putting exercise bikes in offices and urging employees to use them just twice a week could slash their risk of heart disease or diabetes, scientists say.

A study found that sessions lasting only eight minutes and 40 seconds every couple of days could be enough to improve heart health.

Researchers claimed the short bursts of exercise would cut the risk of heart disease by up to 15 per cent, as well as slashing the odds of type 2 diabetes.

The sessions improved how much oxygen people’s bodies could pump round in their blood and made them fitter and healthier as a result.

Putting the bikes in offices, the researchers said, took away people’s excuses of not having enough time or equipment to exercise regularly.

One of those who took part in the study said they felt ‘energised’ by the sessions and another added: ‘I’m getting fitter’.

Researchers said the exercise was so easy that people could even do it in their work clothes without getting sweaty and needing a shower afterwards. 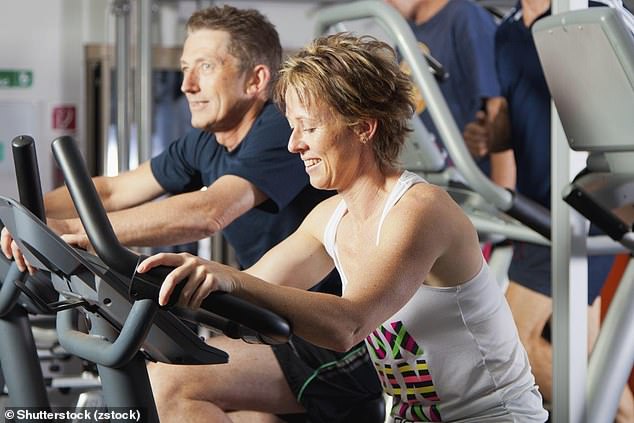 ‘Poor levels of cardiorespiratory fitness are one of the strongest [predictors] for cardiovascular, cancer and all-cause mortality,’ the researchers said.

The study, done by the University of Stirling in Scotland, along with colleagues from Swansea and Cairo, enrolled 25 inactive office workers into a trial.

All of the people worked for councils in Stirling and Swansea, and were split into two groups — twelve of them carried on with life as normal.

The workouts were carried out twice a week for six weeks and were done on exercise bikes in offices, hidden from the view of other colleagues.

The bikes’ programmes mixed light pedalling with two short bursts of cycling as fast as possible for 20 seconds.

Scientists measured the workers’ VO2 max, which is a measure of how much oxygen the heart and lungs can use when they’re working their hardest.

VO2 max is an accurate measure of heart and lung fitness, which is directly linked to the risk of heart disease and other serious illnesses.

Dr Niels Vollaard, a health and exercise science lecturer at the University of Stirling, said: ‘We found that the routine was effective at improving the general health of the research participants.

‘VO2max increased by around 10 per cent, compared to the control group, which equates to a risk reduction for getting heart disease in later life of 15 per cent.

‘Based on previous research, we would expect continuing with the REHIT [reduced-exertion high-intensity interval training] routine would improve VO2max further – again, further reducing the risk of heart disease.

‘We also found that participants considered the routine achievable, acceptable and enjoyable.’

People who took part in the study — published in the journal BMC Public Health — had differing views of how well it went.

One said: ‘If you can’t do something for 10 minutes twice a week and put effort in … then there is something wrong’.

Another added: ‘Going as fast as you can for the 10 seconds, well I can do that! … that is manageable’.

One particularly enthusiastic worker said they were ‘knackered, but then absolutely buzzing’.

‘Those endorphins pretty much lasted the whole day,’ they added. ‘You just feel more alive, more energized… you’ve got more spring in the step… I tend to get a bit of an afternoon slump, and on those days, I noticed I didn’t have it so much.’ 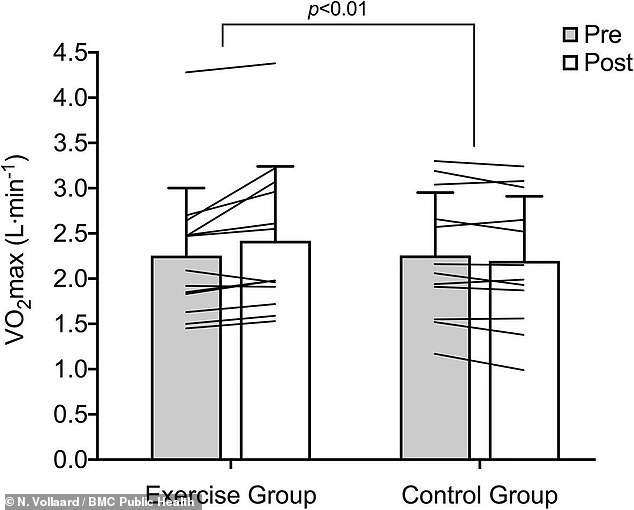 The results of Dr Vollaard’s study showed that people’s fitness, measured by VO2 max, had increased after six weeks in the exercise group (white bar is after the six week programme, grey bar before), but it did not change in the group who did not take part in the exercise

But another said: ‘I got to be honest, I was really struggling during the exercise… I felt like it was killing me’.

And one added: ‘I began to feel that there was just no way I was going to be able to do the 20 seconds flat flat out… I was just like, I just can’t, I just can’t keep this up!’

Dr Vollaard said: ‘Many people do not perform enough exercise and, therefore, are at increased risk of developing diseases including heart disease and type 2 diabetes.

‘One of the most commonly reported reasons for not meeting physical activity recommendations is a lack of time – with people leading busy lives, spending long working days sitting at desks, and commuting by car.

‘Our team have spent the last eight years looking at alternative exercise routines to help people reap the health benefits of exercise in less time.

‘REHIT involves easy pedalling on a stationary bike, interspersed with two short bursts of high-intensity cycling. It is time efficient and perceived as being manageable by our research participants.

‘Prior to this study, this approach had only been tested in laboratories – however, we have now confirmed that it can be successfully implemented in an office setting.’

HOW MUCH EXERCISE DO YOU NEED TO DO?

To stay healthy, adults aged 19 to 64 should try to be active daily and should do:

A good rule is that 1 minute of vigorous activity provides the same health benefits as 2 minutes of moderate activity.

One way to do your recommended 150 minutes of weekly physical activity is to do 30 minutes on 5 days every week.

All adults should also break up long periods of sitting with light activity.