Scientists claim to have found a cure for hangovers in the form of a pill which can be bought for as little as 15p.

It contains an chemical called L-cysteine, one of many amino acids already present in the body and also used to extend the shelf-life of bread.

Researchers tested the tablet on a group of men who were ordered to drink alcohol for several hours on six different occasions.

Men given the pill reported fewer hangover symptoms of nausea, headache, stress and anxiety compared to men given a placebo, results showed.

The researchers claim that if the pill helps to reduce stress and anxiety, people are less likely to drink again to brush off the hangover — otherwise known as ‘hair of the dog’. 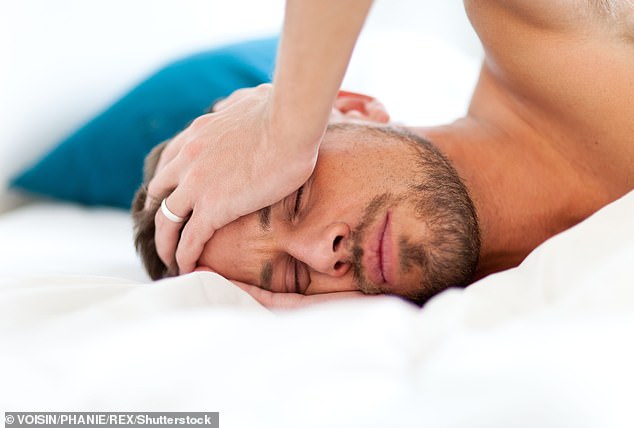 L-cysteine — often sold as a dietary supplement — is deemed important for its role in making proteins within the body, and boosting other metabolic functions.

It can be made naturally in the body and is also found in high-protein foods, such as chicken, turkey, cheese, eggs and seeds.

The study, published in the journal Alcohol and Alcoholism, recruited two dozen volunteers who were aged between 21 and 60.

Participants had to be well experienced in hangovers, according to an advertisement for the trial.

There were initially eight women in the trial but they were removed for varying reasons, such as that they took medications that may have influenced the results of the study.

And several other participants were ruled out because they did not attend all the drinking sessions, or were unable to drink enough.

Therefore, only the data for 19 men were usable for the research, which was led by Peter Eriksson, of the University of Helsinki.

The study involved six drinking sessions on subsequent Friday evenings which all started around 7pm and finished at 10pm.

Each participant was given 1.5g of alcohol for every kilogram they weighed. It’s measured this way so that people are given the same amount of alcohol relative to how large or small they are.

There are 8g of pure alcohol in one ‘unit’ of alcohol, such as a shot of spirit.

Therefore an 80kg man in this study would drink 15 units in the study, the equivalent of around a bottle and a half of red wine, seven pints of low-strength beer, or seven double spirit mixers.

But in the study, the researchers just gave them cocktails of 10 per cent per cent strength alcohol mixed with a fruit juice.

Saliva samples and breath tests were taken throughout the study to measure how drunk participants were.

At every hour between 7pm and midnight, the participants had to swallow their given tablet.

They were randomly chosen to receive either six placebo tablets, six L-cysteine tablets — either a 1,200mg or 600mg dose — or three of each.

The researchers said the tablets were branded Catapult Cat Oy, which were made by the firm that funded the study.

In the morning, participants expressed their degree of hangover, nausea, headache and anxiety on a scale of zero to 10, and of stress from zero to 4.

According to the study results, L-cysteine was found to have reduced or eliminated hangover symptoms of nausea, headache, stress and anxiety to a ‘statistically significant level’.

The 600mg dose of L-cysteine had little effect on nausea or headache, compared to the dose of 1,200mg.

But stress and anxiety appeared to have been managed with the smaller dose, the results showed.

The researchers hypothesised that L-cysteine helps to eliminate acetaldehyde in the body, in turn preventing a hangover.

When ethanol — the intoxicating agent in beer, wine and liquor — is ingested, it gets converted into acetaldehyde.

The build-up of acetaldehyde is what causes the hangover, and the body can’t fully recover until this has been destroyed and digested.

Naturally-occurring enzymes found in the liver are known to have the ability to wipe out acetaldehyde – but don’t always act fast enough.

But the study found no differences in alcohol concentration levels in the evening or morning after between those who took the pill or a placebo.

‘The lack of differences in morning alcohol levels showed that the L-cysteine did not change the rate of alcohol elimination,’ the team said.

It is not clear exactly how the tablets therefore alleviated the hangover symptoms, scientists admitted.

But the team claimed that because people would be less hungover, they wouldn’t reach for the bottle again.

They wrote: ‘The fact of the matter is that higher degree of alcohol-related hangover and stress symptoms lead to more effort “curing” the aftereffects by drinking alcohol.

‘This is especially the case with individuals with predisposition for developing alcohol addiction.’

They concluded: ‘L-cysteine would reduce the need of drinking the next day with no or less hangover symptoms: nausea, headache, stress and anxiety.

‘Altogether, these effects of L-cysteine are unique and seem to have a future in preventing or alleviating these harmful symptoms as well as reducing the risk of alcohol addiction.’

The scientists noted that all L-cysteine tablets contained other vitamins, like B1 and C. They could not rule out that these had some sort of effect.