A simple blood test can predict who will suffer psychotic disorders later in life, scientists claim.

Researchers from the Royal College of Surgeons University in Dublin took samples from more than 100 people deemed high risk of developing the conditions.

Using computer imaging and machine learning to look at hundreds of proteins in the blood, they were able to correctly tell who suffer them 93 per cent of the time.

The experts were also able to identify who would definitely not develop psychosis in 80 per cent of cases.

Many of the proteins linked to the conditions are also involved in inflammation, suggesting early changes in the immune system cause damage to the brain over time.

Scientists behind the study said the findings were a huge leap in the quest to prevent psychotic disorders, such as schizophrenia. 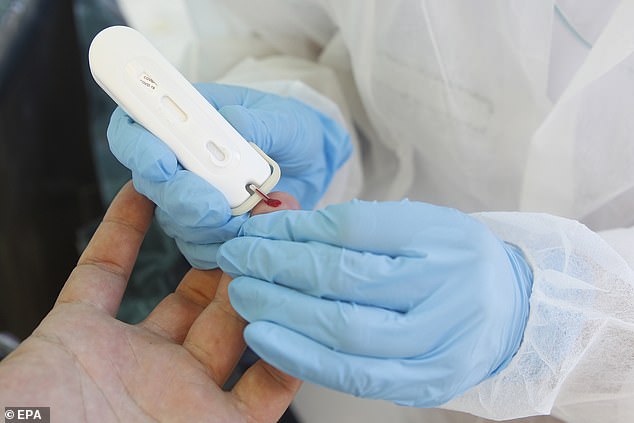 A new blood test can detect five types of cancer up to four years before symptoms appear, according to a new study (stock image)

Researchers looked at 133 people in their late teens and 20s who were at risk of developing the conditions.

People are more likely to develop a psychotic disorder if they have a close family member who suffers from them. Children born with certain genetic mutations are also at risk.

However, only 20 per cent to 30 per cent of these people will actually go on to develop a psychotic disorder.

Participants provided a blood sample and were followed up several times over five years.

A total of 49 participants (37 per cent) went on to develop one of the conditions within the study period.

The scientists assessed hundreds of proteins in blood samples and used machine learning to look for patterns.

They identified 10 key proteins – all linked to inflammation – that could predict who did and did not become unwell.

It suggests that people who eventually suffer from psychosis experience immune system changes fairly early in their life.

Professor David Cotter, lead author and professor of molecular psychiatry at RCSI, said: ‘Ideally, we would like to prevent psychotic disorders, but that requires being able to accurately identify who is most at risk.

‘Our research has shown that, with help from machine learning, analysis of protein levels in blood samples can predict who is at truly at risk and could possibly benefit from preventive treatments.

‘We now need to study these markers in other people at high risk of psychosis to confirm these findings.’

A patent application for the test has been filed, and the research team is working to commercialise this research through licensing and partnering with industry.

The study was published in JAMA Psychiatry.

It’s not the first piece of research to suggest that psychosis could actually stem from an immune disorder.

An Oxford University study in 2016 suggested psychosis sufferers may actually have a condition where antibodies attack the brain.

Researchers analysed blood sample from 228 patients in the study, published in The Lancet.

They discovered around nine per cent had antibodies that may be relevant to their mental illness.

Antibodies were found to attack the ‘NMDA receptor’ – which have previously been shown to cause encephalitis, a life-threatening inflammation of the brain.

This receptor allows brain cells to communicate with each other.

But encephalitis can usually be overcome by prompt recognition and treatment, whereas schizophrenia requires long-term management.

Psychosis is when people lose some contact with reality.

This might involve seeing or hearing things that other people cannot see or hear (hallucinations) and believing things that are not actually true (delusions).

The 2 main symptoms of psychosis are:

The combination of hallucinations and delusional thinking can cause severe distress and a change in behaviour.

It’s sometimes possible to identify the cause of psychosis as a specific mental health condition, such as:

schizophrenia – a condition that causes a range of psychological symptoms, including hallucinations and delusions

bipolar disorder – a mental health condition that affects mood; a person with bipolar disorder can have episodes of low mood (depression) and highs or elated mood (mania)

Psychosis can also be triggered by:

Dust in your home may be spreading antibiotic-resistant SUPERBUGS, scientists say