Medical cannabis could be available in Australia by next year, with an industry body proposing to make cannabidiol prescription-free.

The Therapeutic Goods Administration announced plans to amend Poisons Standard for cannabidiol to give patients easier access to the drug over the counter.

The product would be reclassified from a prescription to non-prescription drug if it is downgraded from Schedule 4 to Schedule 3 by the end of 2021.

The proposed changes would save Australians a trip to the doctor and give them access to CDB after consulting a pharmacist. 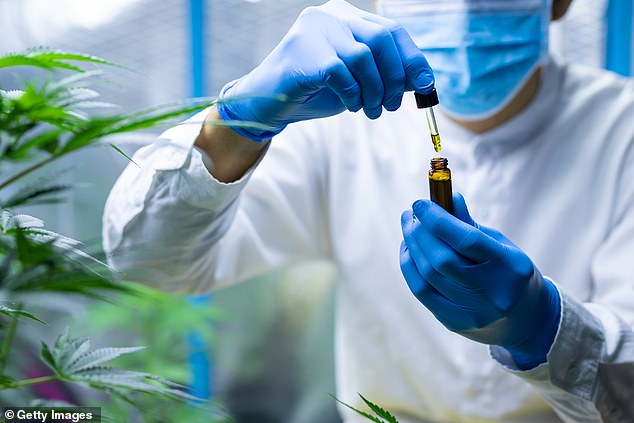 The Therapeutic Goods Administration has announced plans to amend Poisons Standard for cannabidiol to give patients easier access to the drug over the counter. Pictured: A medical expert checking a medical cannabis product

The substance would be only to allowed be taken orally, and patients would be limited to a maximum daily dosage of 60mg and a 30-day supply restriction.

‘The interim decision reflects the significant shift in community and government attitudes towards medicinal cannabis since it was legalised in Australia in late 2016, which has seen it move from a fringe alternative towards an accepted mainstream option,’ he said.

‘As a strong advocate for patient access, Althea has closely monitored the proposed amendment since it began and has participated in the consultation process.

‘We are excited by the TGA’s interim decision to down-schedule CBD products and see this development as a big step forward for prescription cannabis products already available in Australia.’

He added the products should be available toward the end of 2021 and would need to go through a registration process.

Cannabis Access Clinics Dr Mark Hardy told 7 News there was an ‘overall stigmatisation of medicinal cannabis’ and ongoing government red tape made it difficult for patients to access the product.

The TGA received submissions as part of its consultation process until October 12 and a final notice of decisions is expected to be released on November 25.